Canon has released their 2017 year end results, and they were quite good for the company. Canon saw a nearly 20% gain in sales and operating income up about $3 billion USD or 44.8%.

Canon is a large company, and their acquisition of healthcare and security companies has had a very positive effect on their bottom line, as well as their tried and true office imaging division.

Things are also looking up for the camera imagine division, which saw growth in a declining market. Canon saw almost a 4% increase in sales and a very good 22% gain in operating profit for the division. 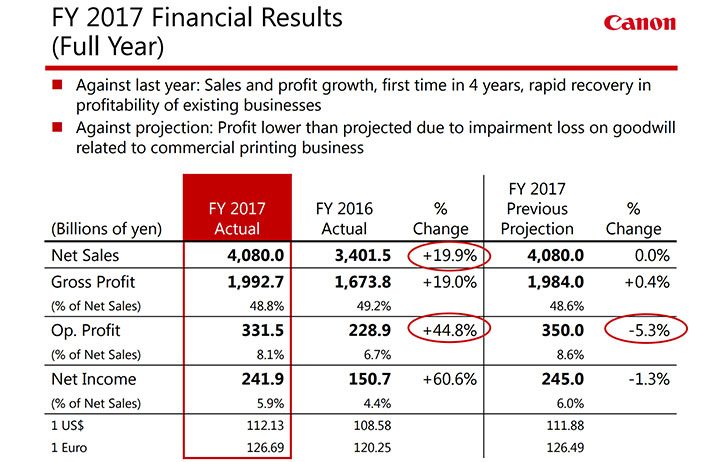 Canon achieved their sales growth with the launch of 6 new cameras, which was the most in the industry, and their growth in mirrorless remains in double digits.

Canon predicts a small growth of 1.2% in camera sales, which would suggest they'll continue to announce more cameras than anyone else in the industry.

Canon also plans to continue developing their G series line of cameras, even as the compact camera market continues to shrink at a fast rate, Canon predicts a 16% decline in compact camera sales in 2018. Canon will continue to work on increasing their market share, as well as increasing profits in the segment. 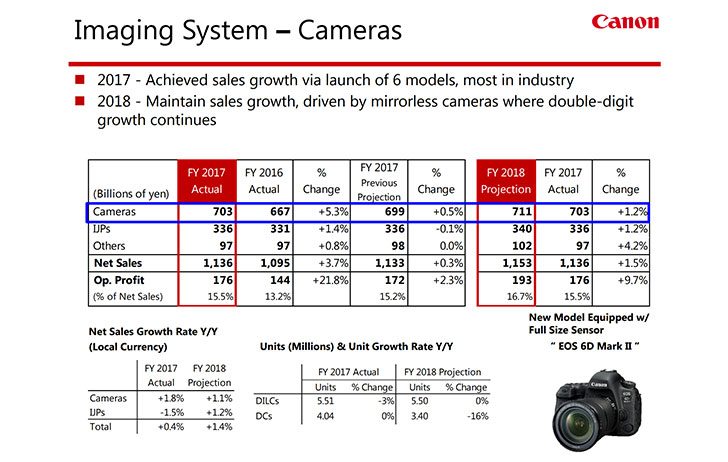 Canon had this to stay about the state of the Camera industry:

In 2017, the market for interchangeable-lens cameras shrank by 1% to 11.4 million units. This rather small decrease reflects, among others, the market’s recovery from the supply shortage caused by an earthquake in 2016. We, on the other hand, posted a sales decline of 3% to 5.51 million units, which was in line with our plan. Although our sales decreased at a faster rate than the market, this was expected as our sales were at a high level in 2016 because the earthquake did not affect us.

Canon took steps to stimulate demand through new products, launching 6 models in 2017, the most in the industry. All of these new products were well received by the market, receiving high markets for their enhanced network connectivity and AF capabilities for which there is strong user demand. Among these, we grew sales of the 6D Mark II – a model that features a full-size sensor in a body that is relatively compact and light and offers improvements in basic functions, which contributed to the shift to hi-amateurs. Launching such new products, enables us to limit the decline in selling prices and as a result, we improved sales and profitability compared with last year.

As for 2018, given that the market in 2017 was at a high level due to the earthquake, we expect the market to shrink by 4% to 11 million units. Within this market, however, we expect our unit sales to be 5.5 million units, which is in line with last year.

The new products launched in 2017 that were just highlighted will contribute to sales for a full-year. With this and continued efforts to enhance our lineup we will stimulate demand and work to further increase our market share. Within this, for mirrorless cameras where we are working to enhance our lineup, this year we continue our aim to grow at a double-digit rate, putting focus on expanding sales of mainly new products that captures SNS user demand.

From a profit perspective, we will work to improve our product mix by raising the proportion of new product sales. Additionally, to reduce costs, we will promote automation and in-house production as well as accelerate sales of mirrorless cameras thereby benefiting from lower cost of sales through volume effect.

In 2017, the market shrank by 10% to 13.5 million units, while our sales were flat at 4.04 million. In 2018, we expect the market to shrink by 19% to 11 million units. Within this, we expect our sales to decline 16% to 3.4 million. Despite the markets continued decline, we will continue to take steps to improve our profitability and market share, expanding sales of mainly G series premium models.

You can find all of the Canon financial results below:

The Canon EOS R6 Mark II will be announced alongside a Canon RF 135mm f/1.8L IS USM

Hands-on with the Canon EOS R7