I did notice! Less money, fewer fps
They could've left it be at 30fps...
N

Nelu said:
I did notice! Less money, fewer fps
They could've left it be at 30fps...
Click to expand...

I wondered about this too. Perhaps the sensor readout circuitry didn't allow it, or they had problems with heat dissipation in the smaller body? Not trying to make excuses for Canon, but in all honesty, I'm surprised that it has 4K at all, LOL!
F

ozturert said:
Canon has just killed it. This pricing is insanely good. Will buy it with 24-105mm f4 L IS.
Click to expand...

I was really hoping the 24-70mm 2.8 would be out (or at least announced) by the time I bought an RF body... Hopefully it does get announced this week so I can decide whether I want to get the 24-105 in the meantime...
Reactions: ozturert
N

I was under the impression the new lenses were launching tonight along with the RP body. Is that still the assumption?

Well damn. Well. Damn. I had no intention of even contemplating this but now......... maybe put my 700d and kit lenses up for sale and start trying to get funds for this to pair with the 7d2. 1299USD should be a bit under 2k in Aus. That is tempting. Very tempting.
Reactions: pj1974
N

nadroj said:
I was under the impression the new lenses were launching tonight along with the RP body. Is that still the assumption?
Click to expand...

this was also UK specs, it could be that USA RP's has 30fps.
R

Just imagine a year after its release, this Camera will be sold in great bundles at an extremely bargain price.

I can see it, the EOS RP will essentially put Canon at the top of the Full Frame MILC market share soon.
S

rrcphoto said:
this was also UK specs, it could be that USA RP's has 30fps.
Click to expand...

Actually, I don't think so.

As mentioned above, EOS M50 can record 4K video at either 24 fps (actual 23.98 fps, when camera is set to NTSC-type video recording), or 25.00 fps for PAL-compatible regions. Faster frames per second recording speeds will require switching to Full HD or HD recording.
Click to expand...

As a fence sitter on the R series, I like the pricing at intro. My grandson may be inheriting an M6 sooner than I would have anticipated. The M6 served me well as a "toe in the water" for mirrorless. Unfortunately, Canon did not factor in the size of my hands, and my need to wear transition lenses into the M6 specs, eh?
D

I'm guessing they're including the cheapest EF adapter and I know I would want the one with the ring. Still....

I'm in no hurry, so I'm going to wait and see what the initial reviews are like for video quality. But this could end up being my FF backup. The other advantage to waiting is to see what happens on the gray market and what happens with people breaking up kits. If I can snag body only at $1k and add the adapter I want....
R

the M50 has little bearing on this really. it's not even the same battery if you are looking at commonalities this way. We'll know in a few hours time.
Q

I didn't read the whole thread, please someone give me a quick yes/no update: is Canon doomed this time? Thanks.
Reactions: Kit. and Aussie shooter

Quarkcharmed said:
I didn't read the whole thread, please someone give me a quick yes/no update: is Canon doomed this time? Thanks.
Click to expand...

Quarkcharmed said:
I didn't read the whole thread, please someone give me a quick yes/no update: is Canon doomed this time? Thanks.
Click to expand...

Canon's competitors, on the other hand, might be starting to squirm a little. With the EOS RP features, price point, EF and EF-S compatibility via included adapter and the RF lens roadmap, others are gonna have to really dig deep to keep up in the market* (which is good for everyone).

* And I don't mean specs-wise. I mean all the factors that drive market movement, which Canon seems to navigate deftly.
Reactions: Quarkcharmed

Full frame mirrorless bodies that are below and above the $1299 Canon EOS RP.

FramerMCB said:
I would just remind you that the 6D Mk II price at launch should have surprised no one because it was in alignment with the introductory pricing of the original 6D and in particular the pricing/value relationship between the 5D Mk III and the 6D vs the 5D Mk IV and the 6D Mk II.

I think the greater issue for many (at least those that were anticipating the 6D Mk II performance/spec-wise, was that in certain tests the 6D's sensor performance bested the 5D Mk III (as the 6D came out after the 5D Mk III) and I think that fact loomed large in a lot of the anticipatory thinking concerning the 6D Mk II's sensor vs. the 5D Mk IV. Canon was not going to make that "happy accident" a second time. The other significant issue for Canon's latest DSLR offerings (in the past 3 years), at least according to various photo sites and forums, has been there seeming unwillingness to really embrace/adopt non-bastardized 4K in these models.

Sorry my post has gone a little rogue here (off-topic). One final statement. What is the number 1 cause of friction in any relationship? Whether inter-personal, or say between a customer and a business (of any kind)?
Answer:
Our expectations - of the other party/person, product, service, etc.

Does it have short-comings? Yes

Has every camera model introduced over the last 80 years had short-comings (for the time it was introduced)? realistically. YES.

I bought a 6D2 on launch day, and I remained thrilled with it. The camera met all of my expectations (I did not expect a cheap 5D4), and I didn't and don't regret paying the launch price one bit, even despite the sales that hit not long thereafter.

That said, , I think 6D2 would have sold a lot more units if it had been more aggressively priced from day one, and that would have subdued a lot of the criticisms that the sensor wasn't as good (or better) than 5D4.

I think that RP nails it on the pricing to try to upsell people looking at premium APSC cameras.
Reactions: jd7 and Mark D5 TEAM II 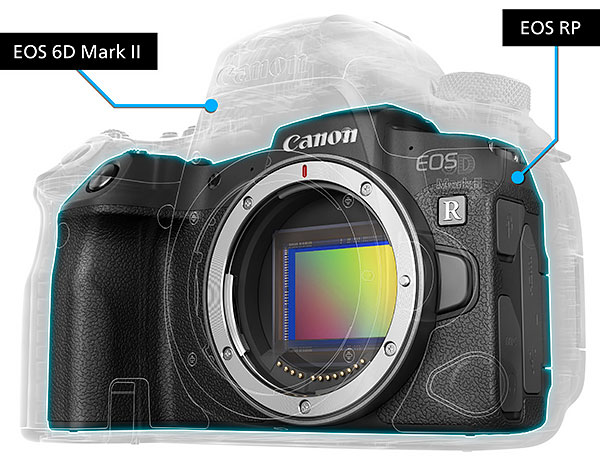