Is SIGMA getting ready to announce their first RF mount lenses? [CR1]

6degrees said:
If same optical structures, IQ should stay near the same, correct?
Click to expand...

No, because DXO scores are highly dependent on the sensor. A higher resolution sensor will give higher score for the exact same lens.
Reactions: 1 user
•••
Upvote 0

RayValdez360 said:
true btu witrh sigma. their most popular lenses or popular lens in general arent telephotos unless you count the 135mm
Click to expand...

You move in different circles. The 150-600mm C is a very popular lens with nature photographers, for example, the S less so, but the 60-600mm could become popular. The Sigma 100-400mm is a cheap alternative to the Canon version. And the major manufacturers have either introduced or will do so combining in-lens with in-body IS to give even more effective IS.
Reactions: 1 user
•••
Upvote 0

Photo Hack said:
Are you telling me I could’ve been using the nifty fifty over all these big expensive lenses all these years? Ugh Canon marketing!!!!!


if they’re just staying with original lens designs and slapping an adapter on these, I would think they could put control rings on the lenses.

They can’t move the lens any closer to the sensor than DSLR correct? Therefore leaving a 24mm or so extension on the RF lens?
Click to expand...

I'd bet that the control ring is covered by a host of patents, Any 3rd party will need to navigate thru them, Canon has not sold licenses to lens technology so far, but its possible that they would swap licenses to patents if it was a benefit.
Reactions: 1 users
•••
Upvote 0

blackcoffee17 said:
No, because DXO scores are highly dependent on the sensor. A higher resolution sensor will give higher score for the exact same lens.
Click to expand...

DXO keeps the way they score products secret and no one has reverse engineered it. Possible its because its not totally related to lens performance, but to personal opinions. Certainly, their scores only apply to a certain lens / Camera model and can't be compared with a different camera. About all you can say is that a particular lens seems to work very well with a particular camera if tested in a warehouse.
Reactions: 1 user
•••
Upvote 0

6degrees said:
I am not sure if I should trust DxOMark. But if their results indicate significant difference, I probably should give a consideration.

After Canon RF 50mm F1.2 comes out, praise all over the places. But check these:

Look at the Otus on a 5D IV and other than the Otus being sharper at f/1.4 than the Canon at f/1.2 the two are almost a perfect overlay. Then put the Otus on a 5DSR and watch it outrun itself on the D800E. You are just looking at megapixels and AA filters and not lenses. The RF lens softens a bit at f/1.2, but that is no surprise. It will score very well when Canon releases a high MP R body.
•••
Upvote 0
D

I think some people just find it difficult to accept that optical excellence isn't reserved to Canon and Zeiss, so they look for other reasons to criticise.
Reactions: 1 user
•••
Upvote 0
L

6degrees said:
That means Canon it’s own lenses will be superior than same-formula-multi-mount lens providers like Sigma, Zeiss, etc. if RF Mount really has advantage over, saying E mount.

Again... it depends. There is a lot more going on that what most people realize. Here is an example.

Lets say you decide that you really want a small lens (normal FL), and that since you don't ever shoot faster than f8, you are going to design a lens that has a max aperture of f5.6 (to give yourself some room).

For such a lens there is absolutely no lens mount advantage. Maybe flange distance (registration distance) plays a role, but ya... pretty much no advantage regardless of the mount (at least none that people tend to focus on). It wouldn't be much of a challenge and even in terms of cost it would be difficult to see how you would end up with a sony or canon lens with any significant price difference unless you take buid quality and such into account.

The MAIN advantage about the wider lens mount is seen in fast glass. And then with what canon did with the 35 mm. They claim they chose the flange distance because they wanted a robust mount (presumably to mount those massive RF lenses, especially the inevitable bigger ones), and I pretty much agree with that approach. But the wider mount allows for lens like the RF 35, were the rear element protrudes past the mount interface by quite a bit. Having larger lens elements shifted to the back helps to provide a better lens + body balance in terms of center of mass. Simpler lens designs allow for better sample variations, cheaper manufacturing costs (hopefully passed on to us) etc.

So if canon makes a 50mm f1.8 to compete against the 55 ZA lens, it probably won't perform better than it. It may very well end up costing about the same to be honest. And that would have to do with the fact that canon would probably use a more conventional design approach, while the 55 ZA is a sonnar design. So it isn't apples to apples. Instead lets take it a step further. I would wager that a RF 50f1.4 would perform on par as the FE 50 f1.4 ZA, for cheaper (say $900-$1000), with a center of mass closer to the rear of the lens.

For more conventional lens design approach, for the faster lenses f2 and faster primes we will likely see how the lens mounts impact various design parameters (including price). For zoom... well zooms are always more complicated to gauge. We just need to see what the holy trinity zooms will look like, cost and perform before we can make a conclusion that they are "better" than their sony GM counter parts.
•••
Upvote 0
L

AlanF said:
We are so lucky to have experts here who know and can predict Sigma's market share and their technology better than Sigma does.
Click to expand...

I know right? Surprising that sigma isn't knocking on our doors begging we work for them as consultants
•••
Upvote 0

How certain are you about this assertion? I did look at DxO, and here's what I found:

DaveGrice said:
How certain are you about this assertion? I did look at DxO, and here's what I found:

Those are completely different lenses you're comparing though.
•••
Upvote 0

DaveGrice said:
How certain are you about this assertion? I did look at DxO, and here's what I found:

DXO scores make absolutely no difference as to whether or not the photographer can take a good photo. Screw DXO scores... no matter which manufacturer they favor.
•••
Upvote 0
C

RayValdez360 said:
Everyone company and i mean EVERYBODY has IBIS except canon , so IS in lenses can go on the backburner except for canon users to this date. SOny, Fuji, Olympus, Panasonic, and even Nikon have IBIS. Canon is just beating around the bush as usual waiting for us to buy all the cameras up before giving us more convenient tech. It's actually insane how they treat their customers when they have all that money
.
Click to expand...

IS lenses will not go on the back burner because of IBIS. IBIS can substitute for OIS to a certain extent, but it performs so much better in conjunction with OIS.
•••
Upvote 0

Are these new lenses or just the older DSLR ones with the mount changed?
•••
Upvote 0

CanonFanBoy said:
DXO scores make absolutely no difference as to whether or not the photographer can take a good photo. Screw DXO scores... no matter which manufacturer they favor.
Click to expand...

So you say, but DXO tells me that the nifty fifty is a better lens than the 600F4, so that’s the lens we should be using to take pictures of grizzly bears and lions..... what could possibly go wrong? 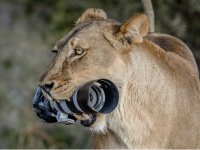 The Fat Fish said:
Are these new lenses or just the older DSLR ones with the mount changed?
Click to expand...

crazyrunner33 said:
IS lenses will not go on the back burner because of IBIS. IBIS can substitute for OIS to a certain extent, but it performs so much better in conjunction with OIS.
Click to expand...

if that is true how many futures lens coming out have IS for all the mirrorless brands aside from telephotos. seems like much less incentive for it anymore and they can just focus on sharpness. It doesnt matter if you think it is a replacement for OIS. The companies are the ones that pay for it and will decide if it is a necessary expense.
•••
Upvote 0

raptor3x said:
Those are completely different lenses you're comparing though.
Click to expand...

No worries. Maybe you can add the link to the comparison you were asserting. You know, where the comparable Nikon lens is always better than the Canon lens.
•••
Upvote 0

DaveGrice said:
No worries. Maybe you can add the link to the comparison you were asserting. You know, where the comparable Nikon lens is always better than the Canon lens.
Click to expand...

and so on.
Reactions: 1 user
•••
Upvote 0
Show hidden low quality content
You must log in or register to reply here.

SIGMA and Tamron discontinue most of their DSLR lenses

Is Canon actually going to launch RF-S lenses alongside the Canon EOS R7?

Mar 1, 2022
Groundhog
G
J
Any news on if/when we will see Sigma and Tamron RF lenses?