I traded in my non-IS 70-200 2.8L (which I loved) for the new 70-200 2.8L IS iii. I did my first tests this afternoon, taken at the worst time of day for photography, but it was all I had to work with. I went out to Arizona-Sonora Desert Museum, which is a hybrid zoo/garden/museum. As most of you know this lens is just a rebrand of the version 2, with a different shade of white paint and some new lens coatings to reduce flare.

I never liked white lenses and would far prefer if they made it in black. That being said, the new shade of white is even worse than the old. The old had a slightly warm cast, but the new is stark white and almost looks cyan in comparison. The important part is how it works and how sharp it is, of course, and there are no surprises. We already know it's a great lens because the version 2 is a great lens - one of the best zoom lenses ever (and if you have a version 2, don't bother changing).

First test of flare is a shot of pathway with hood on and hood off. The sun was high in the sky, so not much of a test, but I was at an angle where the full sun hit the glass with the hood off. The two shots look identical to me, so the flare control seems to work in normal situations making the use of the hood less essential perhaps than with other lenses. 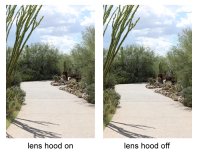 Next to really test flare, I found a tall flower where I could kneel down and shoot almost directly into the sun with the hood off. The sun is just out of frame above the image area. There are no sun streaks and flare seems to be very well controlled indeed. Image is a bit hazy, but not bad at all and certainly easy to fix with a bump in contrast during post production. (I should mention that all of these samples are unedited JPEG except for downsizing). 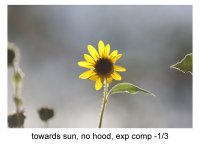 I also wanted to make sure the AI focus tracking mode worked and found an unusually active skunk. Camera tracked it reasonably well, with face sharp at f2.8 on a large percentage of images. Of course a walking skunk is not the same as a bird in flight and if that is your primary interest, you are apparently better off with Nikon (as per Art Morris' recent switch).

With a sitting mountain lion I used the single shot mode, focusing on the eyes. Even shooting at an angle through glass (handheld), the detail is exceptional, as this crop of the left eye shows.

Final test is the image stabilization (which is reportedly identical to version 2, so no improvement there but as I said I had the non-IS version). In the reptile building I zoomed out to 200mm and started low at 1/13 then 1/20 second with blurry results. At 1/40 I got ok but not tack sharp result (though if I was at a better angle I might have gotten sharp). At 1/60 it was tack sharp, which is still not bad for a 200mm lens. I turned off the IS for comparison and it was quite blurry indeed.

Conclusion: My non-IS lens was stellar and I debated getting rid of it (and still partly wonder if I made the right choice). I decided to switch not only for the image stabilization but also because the IS ii and iii focus almost a foot closer. If you have a version 2 stick with it, but if not the version 3 lists for the same price so you may as well get the newest one like I did. If you shoot into the sun a lot then the version 3 may be an upgrade.
Last edited: Sep 6, 2018
Reactions: 1 users
•••

Congrats to your new acquisition. I have the Mk II but I cannot say if there are any differences visible about flare.
I suppose this is impossible without a side by side comparison. And uncle Roger already stated his opinion on the changes.

Concerning your first comparison hood on/off I'd say that the "on" version delivers slightly more contrast esp. in the sky and the bg plants.
This would confirm my personal experiences that with a lens hood stray light is reduced and otherwise it not necessarily leads to flare but to loss of contrast.
Maybe you can confirm this with the full res RAW files. If not, it's the usual bias of the mind, knowing which pic is which

PS.: My personal disappointment with the release of the MK III was that Canon didn't even care about putting the latest 5-stop-IS in it. The rest was supreme already, so why change?
Reactions: 1 user
•••
Upvote 0

Thanks Fred for that good write up. Isn't IS beautiful? Enjoy the new lens.
Reactions: 1 user
•••
Upvote 0

Thank you Fred for this evaluation. Congrats on your new acquisition.
Reactions: 1 user
•••
Upvote 0

Nice review. I think as time goes on you'll appreciate the IS more and more on the new version compared to your non-IS 70-200.
Reactions: 1 user
•••
Upvote 0

MrFotoFool said:
One more change I forgot to note (at least I think it's a change). The lens hood has the lock button like the hood on the 100-400 ii (but does NOT have the sliding window like the 100-400 ii).
Click to expand...

I wonder if they will employ the sliding lens hood window on other future lenses? It seems like kind of a good idea yet people on this forum seem not to like it. I think the primary grievance is it slides open on its own.
•••
Upvote 0
D

Surprised at you needing IS at 1/60 on this lens - still it is great to see that it works.

MrFotoFool said:
I wonder if they will employ the sliding lens hood window on other future lenses? It seems like kind of a good idea
Click to expand...

I really like it as I quite often do tele landscapes with CPL.

yet people on this forum seem not to like it. I think the primary grievance is it slides open on its own.
Click to expand...

The downside is that Canon made it quite easily accessible and easy to open.
That's good in use but can lead to unwanted sliding, eg. when the lens touches your clothes.
That's bad, esp. when you accidently mounted the hood with the window on top and so a lot of light gets in.

But I prefer this implementation of the sliding window over non to have and to grab into the lens hood for CPL.
Reactions: 1 user
•••
Upvote 0
K

MrFotoFool said:
I wonder if they will employ the sliding lens hood window on other future lenses? It seems like kind of a good idea yet people on this forum seem not to like it. I think the primary grievance is it slides open on its own.
Click to expand...

Maybe it needs its own lock button.
•••
Upvote 0