You are using an out of date browser. It may not display this or other websites correctly.
You should upgrade or use an alternative browser.
D

entoman said:
Just had a look at your flickr pages.

There's no way that your photos are "distinctly average". You've got some great shots there, thanks for sharing!
Click to expand...

Thank you, you are very kind
Reactions: 1 user

prodorshak said:
Great. Given my low budget, hopefully now I can switch to R system while upgrading from my beloved 77D. Looks like 2022 will be better (said 2021)?!

RP's were as low as $800 at Christmas, don't expect an R platform to be any less than that.
Reactions: 1 user

entoman said:
Yes I agree, although my posts were really addressing the usability / versatility of the projected camera, rather than the quality of its output, which I'm sure will be fine.
Click to expand...

Seriously? How is, …“produce technically poor and badly composed snaps,” not a commentary on the quality of output?

Instead of trying repeatedly to reframe your silly statement (and failing, because your words are there for all to see), it might be better to just do as you said you would:

entoman said:
Anyway I'll give the subject a rest…
Click to expand...

Except that, obviously, you didn’t.


entoman said:
Ah, finally you get it - "having both is the best of both worlds".
Click to expand...

Finally? My only point has been that having just a rear LCD and no viewfinder does not mean photos taken with the camera are crap (or, in your words, technically poor and badly composed snaps).

Having both IS the best of both worlds. But if you have only one of them, either one of them, taking high quality, well composed photographs is quite possible.
Reactions: 3 users
B

AJ said:
If the EVF is an optional attachment, then the body should have two mounting points: one on the left and one on the right, for left- and right-eyed shooters. Maybe you could mount two EVFs for shooting with the 5.2/2.8 dual fisheye.
Click to expand...

As an optional attachment, the EVF should slide into a port in the hot shoe. It could allow centered placement, and protrude off of the camera back. This allows use by either eye. Of course it should be weather resistant and have another hot shoe on it’s top.
As a bonus, that additional hot shoe could accept another EVF. This would make vertical camera holding with the 5.2/2.8 dual fish eye not cumbersome at all...

Chig said:
Why do you say that? Most telephoto shooting is of fast moving subjects where high shutter speeds are required , once you acquire a subject it's fairly easy to keep it in frame even for birds like swallows.
IBIS isn't crucial for any photography but quite handy at times, I'd much rather have really useful features like higher fps, twin CFe card slots and of course better heat transfer from a fixed sensor than IBIS
Click to expand...

I photograph a lot of birds and low light is aaaaaalways an issue. Plus long lenses magnify camera shake massively.
Reactions: 1 user

scyrene said:
IBIS is less effective the longer the focal length; the RF 100-500L is rated as giving 5 stops of stabilisation with ILIS and 6 combined with IBIS; for the RF 800mm f/11 officially no extra stabilisation is gained by using IBIS (it's rated at 4 stops).
Click to expand...

I'll have a good look at the entry level RF full frame when it's out, it would be great if it includes a viewfinder and a physical cable release port but I have a feeling they will not be included. Depending on the price and specs I may even instead get a used 6D or 6D II.

The point is that IBIS is less effective at longer focal lengths. No one is arguing that the effect of camera shake is greater at longer focal lengths, although there may not be as much need for stabilization spending on subject. When I shoot birds in flight with my 600/4, I’m at 1/2000 s or faster shutter speeds, so IS isn’t much benefit whether in lens or body.
Reactions: 1 users
C

neuroanatomist said:
The point is that IBIS is less effective at longer focal lengths. No one is arguing that the effect of camera shake is greater at longer focal lengths, although there may not be as much need for stabilization spending on subject. When I shoot birds in flight with my 600/4, I’m at 1/2000 s or faster shutter speeds, so IS isn’t much benefit whether in lens or body.
Click to expand...

I think we all understand that IBIS is less effective on longer lenses, but the question of IBIS and telephoto lenses was in regard to whether the camera would have IBIS or not, the argument being that because users will be using telephoto lenses the camera does not need IBIS. Or at least that is how I interpret the initial statement, here:

I am not sure that the R7 will have IBIS. It will mostly be targeted at telephoto users where IBIS is less effective anyway."
Reactions: 1 user
T

Czardoom said:
I agree that the R system does not need specific RF-S lenses (with the possible exception of a wide angle entry), but the 24-240 is not designed for the focal lengths that a crop user will want, nor is it at the price point for entry level crop buyers. The 16mm will translate to a usable crop lens, but so far they don't have any other lenses that really fit both FF and crop focal lengths.
Click to expand...

I think the RF 50/1.8 would work fine with a crop body as a portrait lens (comparable to ~80mm in FF). I certainly used my ancient EF 50 in EF-S bodies that way quite happily.

Bob Howland said:
A cropped sensor with fewer but smaller pixels can be read more frequently than a FF sensor with the same size pixels. The Canon 32MP APS-C sensor, scaled up to FF gives 80MP but the smaller sensor might be readable at 10 FPS. The same processing engine at 80MP could only get 4 FPS. Improving the processing engine costs money. It boils down to: speed, resolution and/or cost - choose two.

Change that last sentence to: At any particular time, it boils down to: speed, resolution and/or cost - choose two.
Click to expand...

You have no argument from me. Different trade offs for different photographers, and Canon will make those it can & can make the most profit on.

Czardoom said:
The best it can? So, you are among those that believe that more MPs means better.
Click to expand...

Better for some, but not for others.

More details? Yes. Some photographers care for those.

I don't care for your straw man arguments. Go find a donkey who'll eat those.

Jasonmc89 said:
I photograph a lot of birds and low light is aaaaaalways an issue. Plus long lenses magnify camera shake massively.
Click to expand...

So do you use a very low shutter speed and hope the bird doesn't move then ?

David - Sydney said:
I am not sure that the R7 will have IBIS. It will mostly be targeted at telephoto users where IBIS is less effective anyway.
Click to expand...

David, Sydney is full of Ibis - so much so I recall you call them "bin chickens", "tip turkeys", "sandwich snatchers" and "picnic pirates". Here's one I took outside our hotel there pre-covid. Has anyone tried to see if Ibis gives any stabilization to the good old EF 400mm f/5.6 L? 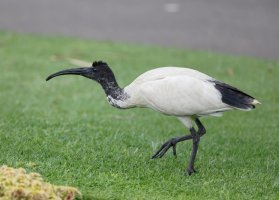 SteveC said:
This time we don't need a pseudo-different mount to prevent a -S lens from being put onto a regular RF mount, as the camera will crop down automatically. So I see no need to create a distinct RF-S mount, even if they do decide to create a crop RF lens.
Click to expand...

On the R series there’s no mirror to collide with the rear of the lens so no need for a different mount.
Reactions: 1 user

David - Sydney said:
It would be interesting to see a RP mark ii... probably without an EVF for size/cost and be a bridge from phone cameras to full frame.
For me, it could be a great backup body or one where I could use it for star trails overnight. A second hand RP would be another option as well.
Click to expand...

Personally I hope Canon don’t take the viewfinder off the RP series. Unless you require fast frame rate there’s very little the current RP can’t do, the ergonomics and interface are as quick as my 5 series, so that makes it a bargain priced “competent” camera. Judging by the serial numbers since 2019 Canon are moving a lot of them.

Bob Howland said:
phrase is "focal length limited". You may have high hopes for the M-system. I certainly did at one point, but there don't seem to be enough of us to get Canon's attention. Incidentally, an M5 looks ridiculous on my Sigma 150-600 Sport zoom but it works remarkably well.
Click to expand...

Haven’t you just contradicted yourself there ?

neuroanatomist said:
The point is that IBIS is less effective at longer focal lengths. No one is arguing that the effect of camera shake is greater at longer focal lengths, although there may not be as much need for stabilization spending on subject. When I shoot birds in flight with my 600/4, I’m at 1/2000 s or faster shutter speeds, so IS isn’t much benefit whether in lens or body.
Click to expand...

Birds in flight is not the only use of a telephoto lens. Most of my subjects are perched birds for example, in the forest where it’s really, really dark. A hell of a lot of shots are like 1/50 sec at 600mm focal length. The more IS the better!

HMC11 said:
The rumoured new R FF cameras seem to be replacements for RP & R. By putting the 1DXIII sensor in the entry-level camera, it would be psychologically challenging to buy an R6 even if the latter have much better features and control. It could well put downward price pressure on the R6 which is good news for me .
Click to expand...

Personally I don’t think so. The R6 is effectively a £2,500 mirrorless 1DXIII, and most people shooting at that rate don’t seem to want more than 20-ish mp. Unless you need that speed you’re probably wasting your money.
Construction of the R6 also made me feel better about swinging a relatively heavy lens like the 70-300L about on an RP. According to those that own both cameras the construction (mag alloy chassis, polycarbonate shell) is identical, and as the R6 is clearly intended to be used with big, heavy lenses I’m guessing the RP can handle it too - with the grip extension, or I can’t handle it !
Reactions: 1 user

Chig said:
So do you use a very low shutter speed and hope the bird doesn't move then ?
Click to expand...

A lot of the time yes! My interest is in small rainforest birds. Usually it’s so dark there that to get shutter speeds up you’d have to use something like iso 5200. Here’s an example of one from the other week. White-collared manakin. 400mm on a crop body. 1/160 shutter. 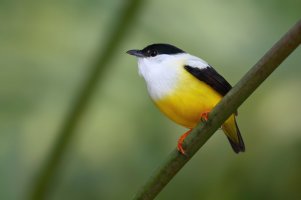 Is the Canon EOS R7 the next camera to be announced? [CR2]