When we posted our original RF lens roadmap, a lot of the lenses listed were expected to launch in 2021, and as we have seen, not many have come to fruition.

The most recent lenses to be announced have been the RF 100mm f/2.8L IS USM Macro and the RF 14-35mm f/4L IS USM. The macro has begun shipping in small quantities and Canon themselves have already added that lens to its list of lenses with production delays.

As you can see from the image below, a few lenses on our roadmap were originally scheduled to have already been in production. 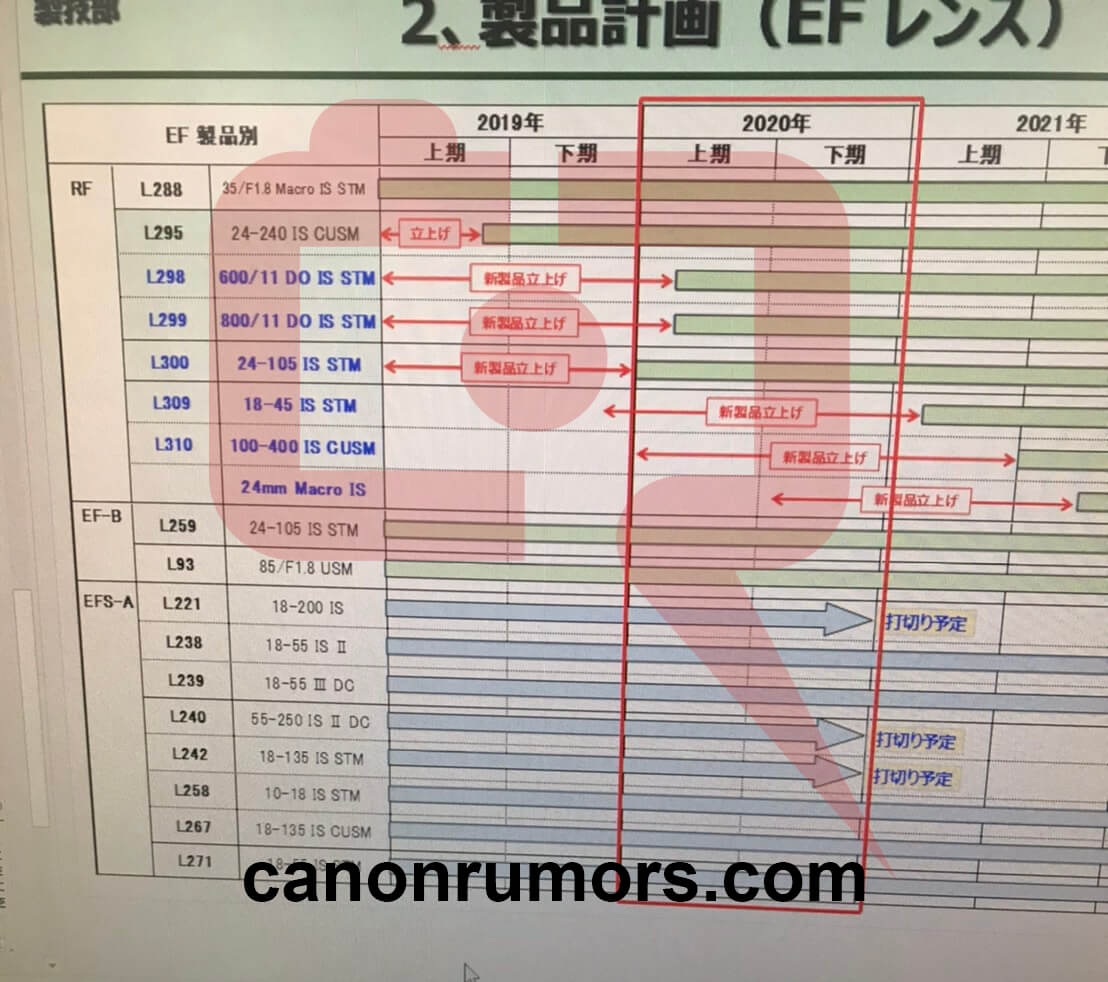 The following rumored lenses above of note.

So this should illustrate that some rumors may have been true at the time they were reported, but have since changed as announcement dates are likely a moving target within Canon themselves.

That RF 24 is mine
Reactions: 7 users

No, they're all mine!
Reactions: 10 users

Less exciting but worth noting is the death sentence for several EF-S lenses
Reactions: 3 users

Now give me an RP successor with IBIS and new sensor tech and I'm in in R system
Reactions: 1 users

Even if it does .5x, I can see it being a good seller among herpers.

Chaitanya said:
Even if it does .5x, I can see it being a good seller among herpers.
Click to expand...

I had to look up what a Herper was.

Chaitanya said:
Even if it does .5x, I can see it being a good seller among herpers.
Click to expand...

With the 14-35 and 15-35 already in existence, I'm really questioning whether that 18-45 is going to be a full-frame lens... I guess it could be a price-point wide angle, designed to pair with the 24-105 STM for an inexpensive lightweight kit? But still...
Reactions: 1 users

By the responses I have gotten from readers, a lot of people would love to have one.
Reactions: 4 users
E

Maximilian said:
Now give me an RP successor with IBIS and new sensor tech and I'm in in R system
Click to expand...

I would respectfully suggest that the only reason to wait for an RP mk2 is that the original RP is 2+ years old and while stil great value for money, a replacement or similarly-priced R body may come as soon as late 2021 or early 2022. I do not miss IBIS as all the RF lenses I own are equipped with the latest IS. The non-L 24-240mm and 35mm 1.8 are great glass for their purpose, and the rather more costly 24-105L and 100-500L are superlative. A mirrorless body does not have the shake induced by the mirror, so even without IBIS you are ahead of a DSLR. The relatively light weight of the RP is achieved because (among other things) it has a lighter battery (LP 17) which may not be able to cope with the power drain of IBIS.
Reactions: 2 users

Canon Rumors Guy said:
By the responses I have gotten from readers, a lot of people would love to have one.
Click to expand...

I think you have to take the "macro" label with a pinch of salt. I have the 35mm 1.8 and for me the capability to focus significantly closer (MFD = 7" 17mm versus 9.5" 24mm) than the EF 35 f:2 I owned before means that I don't have to think about minimum focus point when doing e.g. close-up portrait shots.
Reactions: 3 users
J

Canon Rumors Guy said:
By the responses I have gotten from readers, a lot of people would love to have one.
Click to expand...

I wouldn’t want a 24mm unless it’s a f1.2 (editorial portrait work) any news of that ?
Reactions: 2 users

Likely a follow on to the 17-40 and probably will be the "cheapie" WA zoom. The other two are definitely not cheap. Keeping the cost (and size) down would explain the short end being 18 rather than 17 or 16.
Reactions: 3 users

Photograph the nature while it exists...

It is actually a very interesting option. You can show small subject(s) enlarged in the frame, while still having a wide view of its surroundings. There are no other ways to do such thing but using a wide macro lens. I would definitely like to have one. Although, I would prefer L grade lens.
Reactions: 1 users

I think all these lenses would be fine on an R or RP as Canon continues to add IS to most of its lenses, 5 stops of IS should be good enough particularly the first two wider lenses.

This is also good news for future cheaper Canon bodies that may not have IBIS
Show hidden low quality content
You must log in or register to reply here.

New rumor of Supertelephoto DO’s and the R1 [CR2]