Unless you’ve been living under a rock, you’ve probably heard about the heat issues with the Canon EOS R5 when recording high-resolution 4K or 8K video.

I haven’t touched the camera, so I’m not jumping in with an opinion. However, what I have noticed on social media is very different results and conclusions about using the EOS R5 as a video camera regarding heat. There have been those that have said it is unusable for videography work, and there are others that have said they haven’t had an issue and have loved shooting with it.

Now we have the company Tilta that is showing off a fan that quickly mounts to the rear Canon EOS R5 when the screen is flipped out. As you can see by the images below, it’s pretty and may look like it it’ll be an effective solution, but I don’t think it would have any real effect on cooling down the Canon EOS R5.

I’m not an engineer, but I do have some cooling experience with motorsports and computers. Simply blowing environmental air at the camera without any way for the camera to exhaust the heat likely won’t have any real effect on cooling the camera down.

*Update* Some have noted on this thread that it’s a Peltier type cooling solution, but for the most part, plastic is an insulator, so I’m not sure how effective a Peltier cooler is going to be at drawing the heat through the plastic.

Tilta claims that this module will have a maximum cooling effect of 82f/28c. These numbers don’t really mean anything, as I don’t know how hot the camera actually gets inside. They claim to be able to reduce the heat of the camera down to 59f/15c in one minute. I just don’t see it.

I could be totally wrong!

I do wonder if someone out there is going to take the EOS R5 apart and figure out a way to put vent holes in the camera, I believe that would probably have a more positive effect on dissipating heat than simply blowing air onto the exterior of the body. Holes would obviously go against weather-sealing, but there are some smart people out there that may come up with a smart solution.

For now, here is what Tilta is thinking:

The next camera system to be supported by our Tiltaing collection of camera accessories is the new Canon R5. Featuring a new mirrorless CMOS image sensor and 8K RAW / 4K 120P capabilities, Canon has made an attractive tool for video content creators. Camera cages, handles, and other accessories will be made available for this new camera, along with a brand new cooling module.

Created to extend recording times and help mitigate overheating, this easily installed module combines a fan, heat sink and temperature sensor. It will activate as needed, and can be removed with ease. Learn more about this new feature and look for more information about more Canon R5 components and their availability soon. 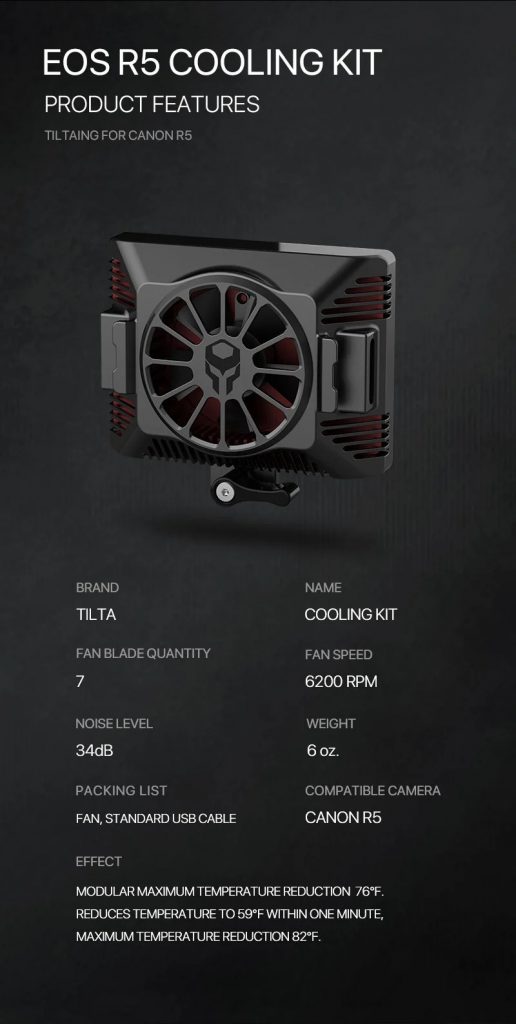