During yesterday’s WWDC event to introduce the new MacPro, Pro Display XDR and Pro Stand, along with a whole slew of software announcements. It turns out Apple was using an unreleased cinema camera from Canon for 8K capture. The camera was used to capture 4:4:4 ProRes 8K RAW.

Jonathan Morrison shows us the camera during a live stream from the WWDC event, you can see the camera in action in the video above.

We’ve mentioned in the past that Canon could be releasing a new Cinema EOS C300 Mark III sometime in 2019 and that there will be an upgrade option to allow the EOS C300 Mark III to capture 8K video for the users that desire the added pixels.

Canon originally showed off their 8K cinema camera at the Canon EXPO back in 2015. The development process has been a long one and I think we’re going to see Canon enter the 8K fold very soon. Canon was late to the 4K party and have said numerous times that they won’t be playing catch-up in that regard again.

Thanks for the Canon Rumors mention in the video.

Going 8k early is not the answer to being late to 4k.
Reactions: 5 users
P

CanoKnight said:
Going 8k early is not the answer to being late to 4k.
Click to expand...

They have excellent 4k cinema cameras (like c200 if you are on a budget or c700 and even c700 FF). So I dont know exactly what you miss in the 4k department?
An upgrade to 8k is totaly realistic and a reasonable way to go for the cinema line.
Reactions: 8 users
T

CanoKnight said:
Going 8k early is not the answer to being late to 4k.
Click to expand...

They're kind of still "late to 4k" in their stills cameras, with heavily cropped 4k footage

Still, early 8k is the answer to not being late to 8k.

But what about 6k? Panasonic will like have shipped a 6k FF camera before Canon releases 8k in their Cinema EOS line.

transpo1 said:
They're kind of still "late to 4k" in their stills cameras, with heavily cropped 4k footage

Still, early 8k is the answer to not being late to 8k.

But what about 6k? Panasonic will like have shipped a 6k FF camera before Canon releases 8k in their Cinema EOS line.

True, they realy neglect the 4k market in SLRs. The 1DX II is still totaly superb in this regard. The grading is so easy (basicaly you dont need to apply any), its a charm But yes, you are correct, besides that the 4k mode in the 5d iv and EOS R is realy incredible bad. The rolling shutter and crop is simply not acceptable :-D

I think a 6k FF SLR camera is in a vastly different market than an 8k Cinema camera. Not only the price (which is likely to be higher by factor 10) but also the entire form factor. It aims at a completely different production enviroment.
But still, the Panasonic looks promising. The lack of lenses not so much though. Time will tell.
Reactions: 2 users

For those who value time in their life and do not want to hear a guy repeating the same stuff over and over for 10 minutes please skip the first 10:45 min in that video.
Reactions: 2 users
U

Wait...I thought Canon doesn't innovate and that no one in the video world takes Canon seriously. At least that is what this forum tells me.

Now, for the really important question -- is it EF mount?
Reactions: 3 users
A

Clearly Canon can do video, but even more clearly, Mac and Canon working together just seems so damn fitting. $$$
Reactions: 1 user
P

unfocused said:
Wait...I thought Canon doesn't innovate and that no one in the video world takes Canon seriously. At least that is what this forum tells me.

Now, for the really important question -- is it EF mount?
Click to expand...

On the DSLR video side, this is absolutely true. Canon is 4-5 years behind competitors in the APS-C space, and at least 2-3 years behind competitors in the full-frame space. In truth, I doubt they'll ever catch Sony or Panasonic in that regard because they dont see their DSLRs and Cine lines as things that should share tech. Whereas Pansonic just made the SH1 to match its Varicam line.

Canon's Cine line on the other hand is great. Expensive, sure, but the C300 was the go-to for a lot of doc and TV work because of the workflow. The C200 is probably saving a lot of one-man band operations a lot of hassle. Its just not reasonable for anyone not making their living off film to own one...unlike say a GH5 or A7s.
Reactions: 1 users
G

unfocused said:
Now, for the really important question -- is it EF mount?
Click to expand...

The benefit of EF mount is auto-focus and I doubt this is targeted at the AF crowd. I'd expect it to be offered in EF and PL mount but I guess it's possible they'll surprise with an RF mount as well. The greater distance between the PL mount flange depth of 52 mm and the shallow 20mm RF flange might complicate that.

However, I'll be expecting Canon to highlight it as a PL mount to show off their new premium line of PL mount Sumire cinema lenses. Ultimately Canon's cinema line is likely to migrate towards RF and PL. EF is going the way of the dinosaurs and Canon isn't going to keep it around just for cinema when high end operators prefer PL.
Last edited: Jun 4, 2019

TheVerge figures it will cost about $35K to top it out but that's before GPUs and displays, which should bring it to about $50k.
Reactions: 1 user 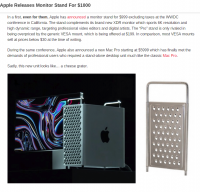 magarity said:
TheVerge figures it will cost about $35K to top it out but that's before GPUs and displays, which should bring it to about $50k.
Click to expand...

You'd need to compare that to something like a similarly specced Dell Precision to see whether they're just pricey or completely off the rails.
Reactions: 1 user
C

Sean C said:
You'd need to compare that to something like a similarly specced Dell Precision to see whether they're just pricey or completely off the rails.
Click to expand...

Believe it or not, the new Apple monitor is "aggressively priced".

It's extremely cheap compared to the competition in it's class. The studios, animation and video production industries spend much more than this on monitors on a regular basis. Expect this to sell well to production companies even when they are not being used on a Mac.

Yeah, the HP dreamcolor monitors are priced like that too. That's why I only snarked at the stand price. I've been picking up 'old, obsolete' screens to adjust color with. (using an HP ZR30w now - super cheap on the second hand market and a full Adobe RGB monitor)
Reactions: 1 user

If you are building a system for Video/Photo editing and rendering, I'm looking now at a high spec MacMini with 6 Core i7. That's $1200. Buy 64GB of Mac Ram from a third party Mac parts store, that's another $500. B&H has the AMD Radeon WX9100 GPU (higher spec than the entry level new MacPro I think) with a case for $1700. MacMini + insane EGPU = about $3400. I'd be interested to see just how comparable that is to an "entry" level MacPro for $6000. Not to mention the fact that the EGPU could then be strapped to any other Mac I own if so needed.
P

I wouldnt necessaryly agree on that because of the 1dx ii. You are certainly correct when it comes to the 5d iv and R, these are a total disaster for 4k Video work. But the 1dx is awesome. The image quality is excellent (maybe even best SLR until beginning of the year. Panasonic s1 certainly catched up, but they lack the lenses at the moment). Until some month ago it was also the only (nearly) FF 4k SLR with 60fps. Its also offering pretty much the best auto focus video mode. Its used by quite some professional (who didnt switch to the cinema line). Its also the most reliable 4k ff camera when it comes to heat. I am very confident that the next 1dx will top this Performance and will easily be one of the best 4k SLRs on the market, maybe even thr best when you look at the complete package. Panasonic and Sony do offer more features and handy stuff for filmmakers but the 1d line is still a VERY good working video camera with the best lense selection.

Below that, you are totaly right, all the other SLRs from canon are a total disgrace when it comes to 4k and its truely 4-5 years behind the competition.
Reactions: 1 users

A high end WS will be expensive. But a $1K monitor stand insults everyone but a billionaire. Apple should buy Leica.
Reactions: 1 user

The entry level 2013 MacPro for $2999 was great for photographers and even video guys who were doing 1080p and even 4k. If you needed something for 3D graphic rendering and whatnot, you could step up from there. Now it's as if the basic photo and video guys are off the table (full time professional Hollywood grade production houses excluded from this statement). We still have needs beyond what a regular machine can deliver, but we don't need a $6000-$50,000 machine either. I could have committed even if the new MacPro arrived at an entry point of $3999... But $5999 ?!?! It's makes the MacMini decked out with an EGPU far more appealing.
Reactions: 1 user
Show hidden low quality content
You must log in or register to reply here.

Canon to finally bring a successor to the Cinema EOS C200

What’s next for the Canon Cinema EOS line?