Eric Potter said:
You're a greedy shill for fraudsters. You were complicit in all this. You called it when you realised you were getting bumped, shame you didn't call it when you were hoping to take the undeclared kickbacks. It doesn't really matter what anybody else got wrong as well. All the best.
Click to expand...

Comments like that are totally unacceptable. Canon Rumors Guy did the decent thing by warning everyone when he found out that everyone had been taken in even though it didn't look good for him, and the regulars here appreciate that and know high quality sites like this cost an arm and a leg to run.
Reactions: 11 users

bsbeamer said:
I was skeptical of their claims on performance and how it would work with genuine Canon cameras that basically need some kind of communication with LPE6/LPE6N. I've used a lot of 3rd party batts for video work in the past and nothing gives you the reliability of the Canon battery metering unless it's with a genuine Canon battery. Straight USB-C power for all cameras will solve this for many, especially with timelapse or long recordings.
Click to expand...

Agree. First I think this campaign was a scam and amex card company fully refunded me the money. Than I have purcheased for around 20 USD a dump LPE6N battery which I connect using a cable straight to a USB-C 45W powerbank to have enough juice for time laps and nigt photography. And it works!

Eric Potter said:
You're a greedy shill for fraudsters. You were complicit in all this. You called it when you realised you were getting bumped, shame you didn't call it when you were hoping to take the undeclared kickbacks. It doesn't really matter what anybody else got wrong as well. All the best.
Click to expand...

You know...
If you're that dissatisfied with the site, you can always feel free to close your account and not read it any longer....

Just two more thoughts, generally...I think that as bad and mean spirited as criticism can be, in the context of web nastiness, much of it all begins to sound the same.
Consider some of the very angry, crude things said about Canon after the "scandal" of the R5 overheating. I remember people posting that Canon was pretty much guilty of war crimes. Just complete crazy talk. So, we live in an age where, for some reason, people get pleasure, or just kill time, by saying the nastiest things possible in the nastiest possible ways...anonymously.

A mistake should be brought to light, examined so that it can be avoided in the future, and then put behind us.

A pat on the back, along with, "Do your best from here on out," and a bowl of soup and some strawberries, go a long way with my kids. My wife is a fairly high level manager in healthcare, and she uses pretty much the same approach with her staff. She says, "Don't focus on the past, but on what fixes the problem, and then stay alert and steady day by day." They love her at work!
Reactions: 5 users
M

Eric Potter said:
Stupid? I'm not the one who got greedy and got myself and others scammed. Just because you were third on the list.. that isn't any kind of mitigation.

Can you clarify on your comments around DPreview?

DPreview say:
"We had nothing to gain from readers backing the project, as we were not at all (and never have been) a part of any Kickstarter affiliate program."

Be honest - if you knew CR would be getting 3,500 in return for his investment would it have made any difference to your decision? And why?
In a way, knowing that someone was relying on the honesty of the company to get a product and return on investment would have made it look even more legit. If he had got 3,500 as a promotional payment with not having laid out a cent then I would agree with you, as it was the only reason he got his money back was because the the grace of Amex.

No-one made you invest - so I ask are you aware that kickstarter is about investing in ideas rather than buying a product? And as such, are you not aware of the risk?
If the answer to either (or both) is 'no' then perhaps the problem lies with you.
Reactions: 1 user

I have been informed of the following by the Kickbooster Platform

The contact that we have for this campaign actually reached out during the weekend advising that they will be making a payment. I will keep you posted!
Click to expand...

As I said previously, if I do receive any of the affiliate money, it will be donated. I'm not sure who I want to donate it to yet, but it'll be something natural world related.

It seems there's only two of us digging into this, I'm sure Gannon and DPReview will ride our coattails at some point. I won't name the other party here, but he's done some good work and came up with this California registration for the company that is behind X-Tra. 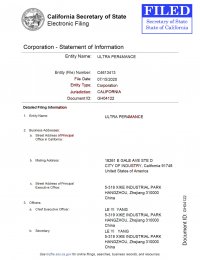 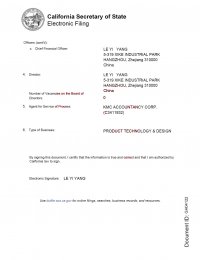 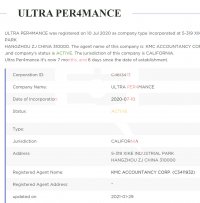 The other person working on this isn't 100% confident that it is a scam, although he did find 3 other campaigns that failed which were run by KMC ACCOUNTANCY CORP. (C3411932). There are also about a dozen companies based in China which fall under this banner as well.

I will keep updating this thread as more information comes to light.
Reactions: 2 users

I know you must feel slighted by some of the reactions you have gotten to your posts about this but the truth is 'haters gonna' hate' and no amount of logic or proof is going to change their opinions. Continuing to shine light on the subject really just gives those haters more oxygen, let them suffocate.
Reactions: 4 users

I know you must feel slighted by some of the reactions you have gotten to your posts about this but the truth is 'haters gonna' hate' and no amount of logic or proof is going to change their opinions. Continuing to shine light on the subject really just gives those haters more oxygen, let them suffocate.
Click to expand...

Yeah, you're right. I'm done! I just wanted a couple of more things on the record.

I will update on the affiliate payment if it ever comes, and then we'll run a poll on where to donate the money. I have a few charities in mind.
Reactions: 3 users

I appreciate the updates on the actual company behind it, it would help identify other bad faith efforts if this info gets out there.
Reactions: 1 user
T

OK as an attempt to distract all from this negativity and put things back to order let me ask: