Give it up. Your idea is impractical in so many ways. Stop trying to be the smartest guy on the forum. It's not working.
Reactions: 2 users
•••
Upvote 0
K

lustyd said:
I'm certain there are lots of people like you. That doesn't make you the target demographic though. Is there a reason you prefer stills bodies to Red or Blackmagic type bodies designed for the job?
Click to expand...

How much does a weather-resistant RED body cost? Is it handholdable when used? How likely is it to survive, say, a cyclist crashing into it?


lustyd said:
Seems to me that if Canon intended to design video in as a high end feature they'd end up changing almost everything about the 1Dx body.
Click to expand...

Czardoom said:
I guess you missed the part where it was mentioned that sensors are cut from larger wafers. Square sensor = far fewer sensors that can be cut from a wafer. Far fewer sensors cut from a wafer = much higher cost. They don't do square because it is not worth it, not because it has always been done that way. I am sure that I have taken many landscape shots that looked better in portrait orientation. I cropped them. Works fine. Not going to pay extra $$$$ for your square sensor. Doubt many would.
Click to expand...

You realise that that "much higher cost" is pennies at the wafer stage? And yes, I fully understand the chip industry.
Reactions: 1 user
•••
Upvote 0
L

Czardoom said:
Give it up. Your idea is impractical in so many ways. Stop trying to be the smartest guy on the forum. It's not working.
Click to expand...

It's not "my idea" and it's not impractical at all, it's the logical next step in camera evolution. Sensors the size and shape of 35mm film only exist because of that 35mm film. Does it make sense to drop all of the pixels above and below the 16:9 frame? It's literally what you're all saying is stupid, yet cameras do this now for almost all video and quite a lot of pictures.
I don't pretend to be the smartest guy on the forum, but it's nice to know I'm not the dumbest.
Reactions: 1 user
•••
Upvote 0
L

Kit. said:
How much does a weather-resistant RED body cost? Is it handholdable when used? How likely is it to survive, say, a cyclist crashing into it?
Click to expand...

You know they make films with them right? Outdoors? Plenty rugged enough and weather resistant models are there if needed. They also aren't the only manufacturer of video bodies.
•••
Upvote 0

unfocused said:
They weren't circular. The original Kodak ("You press the button, we do the rest") yielded a circular image.
Click to expand...

OK. I thought you were talking about the ones of my youth which had 127 film. You must be even older than me...
Reactions: 1 user
•••
Upvote 0
A

Imo IF it really doesn't have a mechanical shutter, which isn't something we've heard afaik, it should have a global shutter. Until then, I want my mechanical shutter. Yes, I know the Z9 and R3 have improved ES a lot. I still want the mechanical, though. Also, of course, the R-series using the mechanical shutter as a dust protector has been a plus, so I think it's worth keeping, at least for this generation, anyway. Canon is pretty conservative with this sort of thing, I feel, so I expect it will remain.

As for 8K video, and the people who have asked why it should be included... Well, no, few people are going to be going R1 mainly for that, but people expect it from a top-line camera with that sort of resolution now. So it's to be expected.

HOWEVER, for many, many people, a hybrid camera is what they shoot video with, including many pros. Tons of people shoot all their video on a DSLR or mirorrless photo camera. There's a lot of money in that and there's plenty of flexibility with it. You can even use the cine lenses with them if you so choose... Though tons of people just use photo lenses. The cinema camera and cine lens are niche products --- with a place, but niche --- and they don't control the whole video production world.

I'm sure it will be great, but I imagine I'll be sticking with my R5 for quite some time myself. It's a great camera, especially for stills. And I've used it with an Atomos V for great video capabilities (not 8K because I don't have the V+), although I'm really a stills guy.
•••
Upvote 0
M

Emyr Evans said:
No more than 60MP for me please, Canon!

AlanF said:
OK. I thought you were talking about the ones of my youth which had 127 film. You must be even older than me...
Click to expand...

Well not quite that old. https://designyoutrust.com/2016/02/15-rare-photos-taken-with-the-first-ever-kodak-photo-camera/
Reactions: 1 user
•••
Upvote 0

unfocused said:
Well not quite that old. https://designyoutrust.com/2016/02/15-rare-photos-taken-with-the-first-ever-kodak-photo-camera/
Click to expand...

sanj said:
Btw FB is a bad example - that is taken over by cell phones.
Click to expand...

Yeah, I should have said Tik-Tok
Reactions: 1 users
•••
Upvote 0

lustyd said:
And yet, here we are still with rectangle sensors and camera grips in 2022. Just because it's been mentioned before doesn't make it a bad idea. It's frankly embarrassing that GoPro did it before Canon.
Click to expand...

Um, wouldn't one still need to cut a rectangular file out of that circle? You suggested a 35mm circle. Seems to me the result would be akin to aps-c size (or smaller) after cutting out the rectangle... or we buy stock in the round picture frame company?

Honestly don't get the point, but I'm in Arkansas and that ain't biscuits they're cookin' next door.
•••
Upvote 0
N

I don't see how it's gonna be a high MP body and also be the sports leader. Any ideas?
•••
Upvote 0
A

I hope for ~40 MP, Global Shutter or a very fast stacked sensor, and an improved version of the new eye-tracking AF system found in the R3.
•••
Upvote 0
D

Skyscraperfan said:
I do not like the developement that more megapixels are now considered more premium or flagship than low megapixels. If you compare the R5 and the R3, you see how much better the R3 is in low light evne if you scale the R5 images down to the resolution of the R3.
Click to expand...

Where are you seeing this? Top pair from the normal dpreview scene, bottom from the low light scene (left side, i.e. lowest light). They're equal in the top comparison, and the R3 is maybe a hair better in the bottom (1/3ev or less). 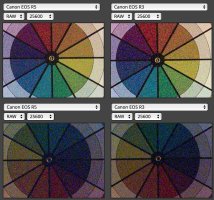 lustyd said:
You have a 1Dx for video? Can I ask why you didn't want a Red, Blackmagic or similar?
Click to expand...

Well, I would be in the market for a R1 with those high video features....
I not only want, but expect the high end stills camera body to have pro like video capabillties.

Not looking for separate high end video and stills cameras. Reds and the like are out of budget anyway, whereas a R1 will be in budget.

lustyd said:
Because we went through decades of film based cameras, obviously. Those days are over though, time to move on
Click to expand...

DBounce said:
Firstly, if I wasn’t the target demographic this camera would not be 8K capable, as the rumors are suggesting. Clearly hybrid shooters are the target market… and that’s me… and people like me... I think we are the majority.

Leica m11 is stills only… as it’s the Hasselblad X2D… those are your highend “stills only” options. The R1 will be “a jack of all trades and master of all”… it won’t master video without the specs I’ve mentioned. And it better bring some serious dynamic range!

I prefer stills bodies because of convenience. I don’t like having to choose between shooting video or shooting stills. If I have a hybrid, I can do either; Also hybrid bodies draw less attention.

I hate rigging cameras… but to avoid rigging the features the camera offers must be complete.
Click to expand...

Actually, as I understand it...The Hasselblad X2D has video coming in the somewhat near future with firmware updates.
I believe the X1D had video....and from what I read and hear, the X2D has it coming soon.