Fairlight updates mouse and keyboard edit selection tools so customers can work faster, along with Fairlight Audio Core and FlexBus, a next-generation audio engine and busing architecture with support for 2,000 tracks. Editors get a metadata slate view with bin dividers, zoomed waveforms for audio trimming, smart

reframing, a unified inspector, and dozens of other time-saving tools. In addition, compositions created in Fusion can now be used as an effect, title or transition on the edit and cut pages.

The mesh-based warping tool lets customers adjust two-color para7 at once. Customers can adjust both hue and saturation or chroma and luma. Adjustments are made by dragging control points, with smooth falloff for clean, natural-looking adjustments. It’s an entirely new way to transform color in their images.

Selecting and tracking people for targeted correction has never been easier. Magic mask uses the DaVinci Neural Engine to automatically create masks for an entire person or specific features such as face or arms. Customers get matte finesse tools, the ability to add and remove strokes, and automatic tracking.

DaVinci wide gamut and DaVinci intermediate are timeline color space and gamma settings that provide a universal internal working color space. It’s larger than what cameras can capture, or BT.2020, ARRI wide-gamut, and even ACES AP1. Customers will never lose image data, no matter where it comes from.

DaVinci Resolve 17 is the biggest update in Fairlight history with new features, tools, and core improvements that make it the world’s fastest and highest quality solution for audio post-production.

Edit selection mode with new keyboard shortcuts unlocks functionality previously available on the Fairlight Audio Editor. These context-sensitive tools make editing incredibly fast. If users are switching over to Fairlight, these intuitive and familiar tools will help customers get up and running quickly.

Fairlight Audio Core is a low latency, next-generation audio engine that intelligently manages workload by using all CPU cores and threads, as well as the optional Fairlight Audio Accelerator card. Customers get up to 2,000 tracks, each with real-time EQ, dynamics, and 6 plug-ins, all on a single system.

FlexBus is a flexible bus architecture that uses up to 26 channel wide multi-purpose buses instead of fixed buses. Customers can send tracks to buses, buses to tracks, and buses to buses in as many cascade layers deep as needed to create massive sessions. Route anything to anything without limitations.

The new transient analysis tool automatically detects individual words, beats, or sound effects. Transient markers are displayed as vertical lines in the waveform. Customers can navigate between them using the arrow keys. Transient markers make it easy to identify specific parts of a sound for editing.

Fairlight Audio Core and FlexBus enable large projects with thousands of tracks on a single system. Previously this required “chase” computers to be sync’d with a primary system. Plus DaVinci Resolve’s multi user collaboration lets multiple sound editors work on the entire project at the same time.

Metadata slate view with bin dividers makes it easy to sort and find clips based on scene, shot, camera and more. When used with source tape, it’s the fastest way to jump in and out of scenes or groups of shots.

Now customers can edit in 16:9 HD or Ultra HD and quickly create square or vertical versions for posting to Instagram and other apps. The DaVinci Neural Engine automatically identifies faces and repositions them inside the new frame so customers don’t have to do it manually.

Finding the right effect, transition or title is faster and easier than ever. The elegant, new multi-column view lets customers see more and scroll less. Descriptive icons also help customers quickly find what customers need. Plus, customers can hover scrub the mouse across any item to see a live preview in the viewer.

Live production projects from ATEM Mini Pro ISO can be opened as a video edit. The sync bin with multiview lets customers fine-tune edits from the original live production or even replace shots. You can use the HD ISO recordings from ATEM or relink to Blackmagic RAW camera files for finishing in Ultra HD.

The edit page adds dozens of time-saving new features that professional editors have asked for.

Now customers can create easily managed, independent proxy media that dramatically improves system performance and makes projects portable. Proxies can be as small as 1/16th resolution and saved as H.264, H.265, ProRes or DNxHR. They can even be generated internally or externally by third-party tools.

It’s now easier to create synchronized multicam clips. Simply stack clips on the timeline and use the new “auto-align” tool to sync based on timecode or waveform. Customers can also manually move clips into position to create a sync map. Timelines can be converted into a multicam clip or a compound clip.

The render in place command lets customers generate render files for any portion of the timeline. Once rendered, customers can move, edit, and trim without having to re-render. Unlike cache files, render files are easy to manage and portable.

Compositions customers create on the Fusion page can now be saved as a template and used on the edit or cut page. New animation curve modifiers can be used to automatically retime animations when customers change their duration in an edit. Audio playback with waveform display makes it easier to create precisely timed animations, there are shared markers with the edit page, and more. In addition, 27 GPU accelerated

Resolve FX have been added to the Fusion page, including the noise reduction and sharpening tools from the color page. New node view bookmarks make it easy to navigate large comps, the toolbar can be customized with their favorite tools, and vertical layouts are supported in the node editor.

Now anyone can build their own post-production studio. The free version of DaVinci Resolve now includes the revolutionary multi-user collaboration tools previously available in DaVinci Resolve Studio. That means customers can have multiple users all working on the same project at the same time, for free. 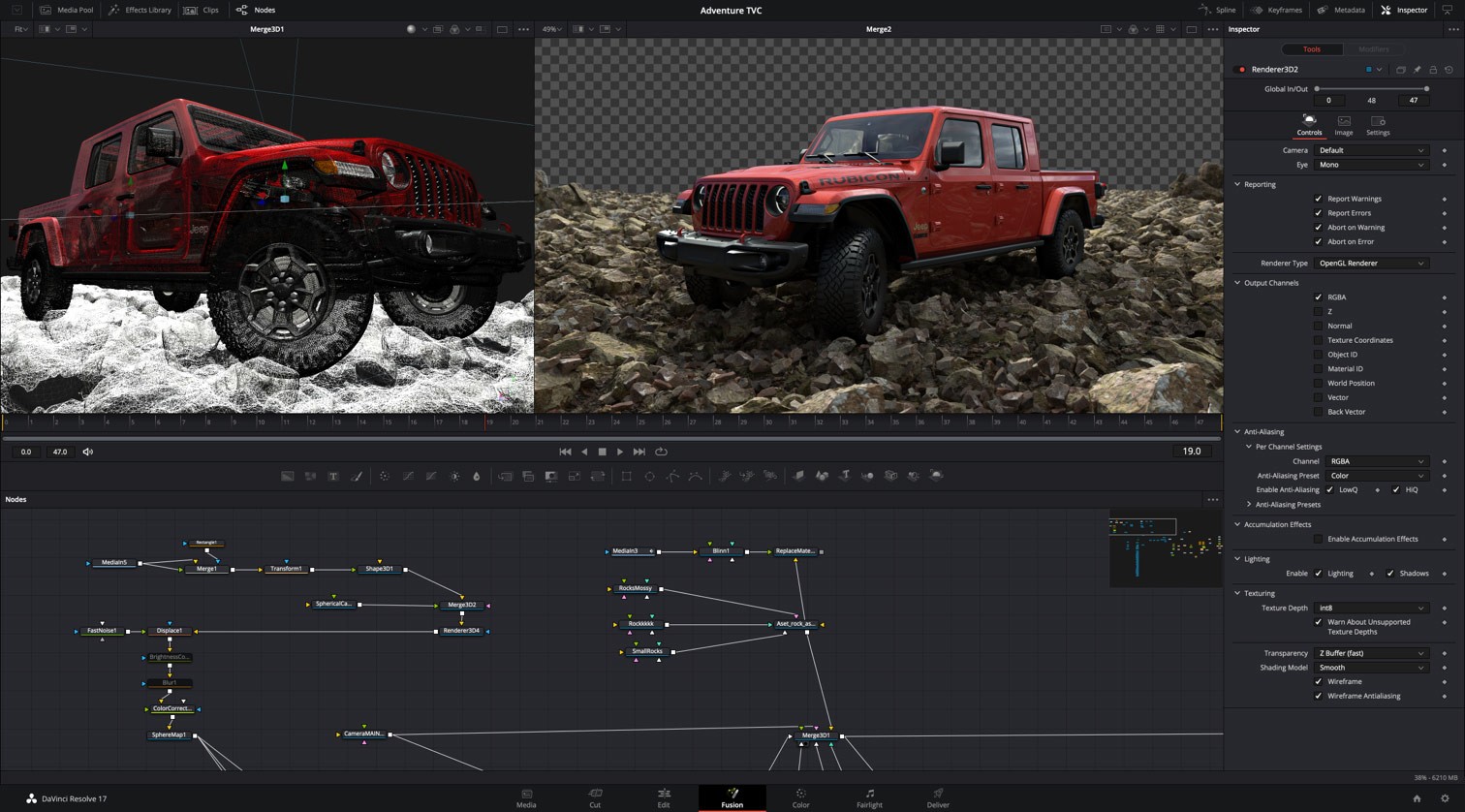 “This is a massive update and it has amazing new technology and features for colorists, audio engineers, editors and visual effects artists,” said Grant Petty, Blackmagic Design CEO. “While the new color science, HDR grading and improvements and Fairlight usability are the most noticeable features, what I am most proud of are the thousands of small improvements that customers will notice every day!”

I got the email yesterday and went to see if it was available, but just a announcement. I just use the free version to check 8K playback and verify that my R5 is recording all the video modes properly.
J

Wow, that came out of no where. It is amazing how tight a ship they run over at BMD.

A lot to like in there. The biggest for me is that the it sounds like the color controls will no longer be hyper sensitive when you are editing in ACES. Sound like it might be easier to have parallel SDR & HDR paths. If it is possible to do one grade and deliver both that would be huge but I am not sure that is what they are describing.

With more AI it is going to mean we are going to need bigger. beefier video cards. Lets hope AMD and NVidia get their supply act together. What I don't see here is better support for AMD video cards on Linux in specific the ability to use the hardware encoders and decoders like you can with NVidia. That sucks rhinos.
E

Great for Mac, terrible for PC. The interface on the Windows version is not scaleable. You need a microscope to read the menu items or anything else in the interface.
Edit: if you use your 65" 4K TV as a monitor, you'll probably be able to read the menus
J

Etienne said:
Great for Mac, terrible for PC. The interface on the Windows version is not scaleable. You need a microscope to read the menu items or anything else in the interface.
Edit: if you use your 65" 4K TV as a monitor, you'll probably be able to read the menus
Click to expand...

Same thing on Linux. But they have made changes in the interface with 17 to make some things much easier to see. The new magic mask is just insane in how well it works. You can do rotoscoping with out a green screen. Amazing. The warping tool is another really great idea.
S

Never did get davinci resolve to work on my linux box (and it won't work on my windows box either, I'm running a super old version of windows, airgapped).

A great package for those who can use it, meanwhile I've been using Flowblade which is buggy and crashprone.
P

Etienne said:
Great for Mac, terrible for PC. The interface on the Windows version is not scaleable. You need a microscope to read the menu items or anything else in the interface.
Edit: if you use your 65" 4K TV as a monitor, you'll probably be able to read the menus
Click to expand...

Jeah, indeed a bummer - and disapointing that they still didnt fix it in V17.
But there is a fix: rightclick the application, properties, compatibility, High dpi settings. There you can try some stuff like forcing the windows scaling...
Show hidden low quality content
You must log in or register to reply here.

You can now get Skylum Luminar 3 for free