Looking for something the pic included, its on amazon WITH the canon 600 but I can't find it separately. The selens ones are rubber and too expensive, but I got 2 of these plastic ones about 2 years ago on either ebay or alixpress and now they are impossible to find. Shouldn't cost more than $15. Thanks in advance if anyone can send me link where to get. And it doesn't have to be screw in, I don't mind the slip on version. 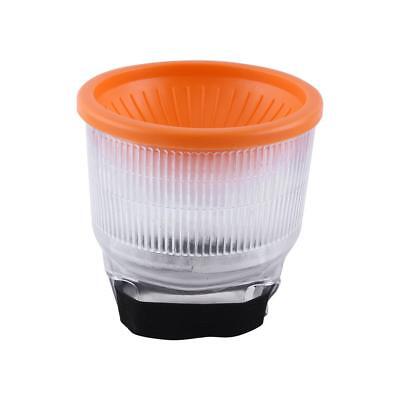 Works great to reduce the harsh speedlight flash and shoot in portrait without annoying shadows. Convenience to carry and suitable for outdoor capturing. Hope you will enjoy your shooting. Lambency diffuser spread and soften the light emitted from your flash unit, bouncing off ceilings and...
www.ebay.com

unless you are after something specific..
B

yeah have that one already, can be a bit harsh, i'm just looking for the one above, thanks.

I've seen a similar post before. I suspect there was a patent issue that kept them from being imported, and Gary Fong keeps them off ebay, Amazon, Alibaba and similar online sites. There are somewhat similar designs that would not violate a patent, but they probably don't work the same.

Just buy a authentic one rather than a copy of someone's patented invention.

BTW, I did find a reference to a lawsuit brought over the knockoff's.
B

If you look at the picture in the OP , its nothing like a gary fong one

Gary had 3 patents for "photographic light diffusers". Have you read them?

It doesn't have to be an exact replica of the one he sells to violate one of his patents.

bergstrom said:
If you look at the picture in the OP , its nothing like a gary fong one
Click to expand...

Apparently, he won his lawsuit, they are gone. His patents have a lot of detail about more than just the outside look. There are two types of patents, one is for the look and external design, the other is for technical construction. The 2nd type is much more difficult to work around.

The other thing to consider is that he has high powered attorneys that can force small companies into bankrupcy, and large distribution channels like ebay, Amazon, B&H, etc are not going to fight him when the product is a obvious copy.
Last edited: Aug 11, 2019
B

well its on amazon that I found the pic, i just took a crop from it. Theyre selling that diffuser in a bundle, but I'm seeing if I can get it on its own.

You should have bought more, because today you're not getting that for "shouldn't cost more than $15" in late 2019 with a Chinese trade tariff war going on. Hmm.

This is discussed ad infinitum on another photography forum I'm sure we all frequent, too. Gary actively defends his stake, good for him. Whether it's overstepping? Not an attorney.

Then again, Dr Damadian invented the MRI in the '70s but a few unscrupulous engineers stole proprietary tech from a super-excited pioneer who didn't think he's need to protect himself that way, and gave it to their subcontracting boss for a hefty fee I'm sure, and the world suddenly had MRI machines everywhere, and Dr Damadian still has to work for a living instead of living in his lab inventing the Next Big Thing.

There is something to be said for defending what's yours.

Although? Unless it's a model shoot or wedding where your and your gear's appearance matter - in which case, WTF are you doing with speedlites when high-output wireless ETTL DC monolights are under $1000, even under $500 for no-names, these days, you dummy? But a small soup container from a Chinese takeout works a treat with a little gaff tape if the walls/ceiling are too far to get a bounce. And if it's too harsh, a #4 bleached coffee filter fits perfectly and is suprisingly neutral white. And if one's not enough, 4 will be. Cost? Free for the asking. (*usually. NYC Chinese restaurants might charge you 0.50 for a soup container with no soup in it.)
S

trust me, this is the most reasonable option for a run and gun situation as it is super light, allows you to shape your light as you pleased, and does not make the camera handling unwieldy. unless there is a nice and white ceiling 8 to 11 feet overhead The versatile FlashBender 2 Large Reflector is adaptable for use with on-camera or off-camera flash. As a shapeable reflector, it can be used as a bounce flash reflector, gobo, or snoot to soften, shape and control your main, background, hair, rim, or accent lights. Features: Makes a bounce...