josephandrews222 said:
What I like about the M6 II (so far) as far as ergonomics are concerned:

(1) In my hands, the ISO was too easily accidentally changed in the M6 I. It looks like this has been changed.

(2) In my hands, in certain specific usage patterns (i.e. dangling around my neck with a non-stock [much-smaller] strap...while mated to te 18-150 lens), the camera was able to turn itself on. There are threads on this at a couple of places on the 'net. It looks like this has been changed, too.

(3) It looks like the focus position, when the viewfinder is attached, is more like the m5 in that you can move it around on the touchscreen with your fingers

I will buy at least one.
Click to expand...

If the price is right, I could be convinced as well. As a light weight travel camera, that could be right on the money.
•••
Upvote 0
R

bitcars said:
If this picture is accurate, look at the sealing of the memory card door, then 90D is likely to have only a single SD card slot..

Canon, I am not sure 7D II users will be too happy about that..

Edit: I guess there is still hope that they perhaps figure out a way to stack 2 vertical SD cards in that little space?
Click to expand...

Does this mean that when looking through the optical viewfinder of the 90D and shooting full rate of 10 fps the AF is fixed; as in you have no AF available when shooting stills at 10fps? please tell me I am misinterpreting this.

My view of the article which these posts follow is below. No snark intended.

The article contains the following: "We have heard that an EOS M5 Mark II is coming, and was originally going to be announced alongside the EOS M6 Mark II, but has been delayed. There has been no word on when we can expect a new flagship EOS M camera. "

In my mind, these two sentences sum up the dilemma (opportunity!?) that Canon faces with the M series of cameras.

Because to me, a properly-specced M6 (with its smaller form factor)...an M6 that can do everything that the M5 can with the add-on viewfinder...to me:

The M6 is the flagship of the M series of cameras (not the larger, bulkier M5).

A lot of folks just don't understand the M. Perhaps they don't want to.

The image below was acquired with the M6 and its fill-flash...using the 15-45mm kit lens (speaking of which, the lens in the M6 II video did not seem to be a 15-45 II, did it?). Two minutes post-processing at most. 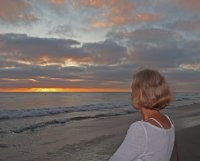 ...while walking the beach in Encinitas CA. I didn't go there to take pictures. The M6 is a very useful tool!
•••
Upvote 0
D

Random thoughts...
* Both cameras look very impressive.
* Love the 100% viewfinder on the 90D, but this also points to it being intended as a 7D replacement which 7D2 fans may not appreciate.
* A lot of people will complain about 32mp but going lower would not improve high ISO or DR as is commonly believed. This is a big gain for wildlife and sports.
* 7D2 fans may still find some things to dislike. It looks like 1 card slot and the 45pt system, not the 65pt system. On the card slot I can sympathize. But the AF sensor is backed by the best iTR sensor made so far, so it might just offer better AF than the 7D2.
* Uncropped 4k w/DPAF was a must hit target and it looks like Canon did it.

For months I've flirted with the idea of getting an XT3 mainly for the video. I kept hesitating because I'm basically a stills photographer with Canon glass who wants to play with video, and it felt like the XT3 would end up being only for video. I can't see myself getting a Fuji lens kit or suffering with the AF issues of adapted Canon glass. (The Fuji adapters aren't as good as the Sony ones.)

These cameras will work with all of my existing lenses with DPAF video without compromise, and I can see either one filling a stills niche as well. I'm in no hurry so I'll wait for reviews, but I think one of these will find a home in my kit.
•••
Upvote 0
D

rbielefeld said:
Does this mean that when looking through the optical viewfinder of the 90D and shooting full rate of 10 fps the AF is fixed; as in you have no AF available when shooting stills at 10fps? please tell me I am misinterpreting this.

dtaylor said:
* Love the 100% viewfinder on the 90D, but this also points to it being intended as a 7D replacement which 7D2 fans may not appreciate.
Click to expand...

100% Viewfinder isn't new. The 80D has it as well. The joystick, spot AF and advertised wheather sealing are 7D features that make it much clearer that this is indeed the replacement for both, I think.
Reactions: 1 user
•••
Upvote 0
D

Joules said:
100% Viewfinder isn't new. The 80D has it as well. The joystick, spot AF and advertised wheather sealing are 7D features that make it much clearer that this is indeed the replacement for both, I think.
Click to expand...

My mistake, and good notes on the other new features.
•••
Upvote 0

Heh, clearly Canon timed the video leaks right after this "everything is quiet" post so as to maximize the dramatic irony.
Reactions: 1 user
•••
Upvote 0

So no IBIS on either model? Or did I miss something? Not that I personally care about IBIS but if it isn't there it will be used as a way to ignore the positive aspects of the cameras. As a 7d2 shooter however, despite the good bits about the 90d it is not a replacement for me
•••
Upvote 0

sdz said:
It was believed by many that the R line was a knee-jerk response to the threat Sony posed to Canon's camera businesses.
Click to expand...

It was believe by many who have no understanding of product development timelines.
Reactions: 3 users
•••
Upvote 0
Show hidden low quality content
You must log in or register to reply here.

Canon EOS R100 specifications, which is possibly Canon’s next camera to be announced [CR1]