I've had a couple days with the 600, and only a few minutes with the 800, but here are some observations:

1) They do actually make sense. I was a little skeptical, but having used them, I'm quite taken by them. I just came back from a 4-hour walk with kids, dog, wife in the woods, and I never would have taken a 600 with me. It was light and easier to use than I anticipated. I got the motion down for extending the barrel, and then things just got easy. It's as handleable as my wife's Sigma 100-400. I wore it on a hip holster attached to an R5, and it was never too bulky that it caused any issues.
2) The image quality in good light is strikingly good. It is likely on par with the bare 400 f/5.6 L in terms of quality. But if you were to take a 2x teleconverter and stick it on the 500 f/5.6, you'd also find yourself with an 800 f/11, but it would be very far behind the quality of the actual 800mm f/11 DO. In other words, you get the 800 focal length, but the 400 equivalent quality.
3) Only the center third of the viewfinder is active for autofocus, and that makes shooting moving targets harder. The tracking is just as good on it as with the other lenses, though. I think this is the biggest downside to the lens. See note below, though, for a counter-point....*
4) Putting a 1.4x RF teleconverter on the 600 f/11 (makes it f/16 840mm) works beautifully. Was very surprised how well this kept up with AF and tracking.
5) In bad light, the f/11 is mostly working well, as the R5's low light performance is at least a stop better than my R or my old 5d4. It's like f/11 is the new f/8.
6) It's very weird not to have aperture control. You get used to it, but it's weird. The lens is at the fixed aperture.
7) As a cheap DO lens, I expected bokeh to be fair to poor. It's actually pretty nice. See image below with a quite busy background.
8) I'd convinced myself they came with hoods. They don't. Ugh.
9) I received the 800 f/11 only this afternoon after the big walk. Shot some stuff outside just for kicks. I suspect this has higher image quality than the 600. The IQ/price ratio is something quite new.
10) Minimum focus distance isn't terrible, like the 800mm f/5.6, but it's not useful for small stuff. 0.14x reproduction ratio.

Will be adding to this post via editing, so stay tuned.

* I was doing some direct comparisons between the 600 f/4 II with 1.4x tc versus the 600mm f/11 DO with 1.4 tc, and I found myself hearing a crashing noise in the brush behind me. A fawn was running down the hill on the game path on which I was standing. It was clueless that I was there, facing the same direction it was facing, just ahead of it. I wanted to haul the 600 f/4 around slowly to try to capture this, but I knew it would never work. I'd have to dismount it form the tripod and swing this tree-branch-sized lens around. Instead, I raised the 600 f/11 up on the other R5 and snapped 3 pictures immediately. It was a stark lesson in the utility of a smaller lens with wildlife shooting.

Here's that fawn with the 600mm f/11 quickdraw shot at f/16 due to the 1.4 RF teleconverter with effective focal length of 840mm. Any closer, nothing would be in focus. 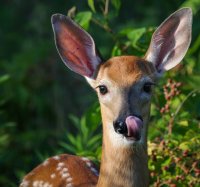 Interesting, thanks for sharing. I was thinking whether the 800 f11 made any sense to pick up - I could use the reach at times - but my RP's high ISO performance really isn't up to the task TBH. Maybe later (or see what other options appear).
J

Lovely shot. Initially I thought the idea of buying a fixed f11 lens did not make much sense, but today I purchased the 800 mm f11 from Amazon.com for delivery on Monday. I am a bit annoyed that Canon makes the lens hood an optional item; I would have rather paid $50 extra for the lens and had the lens hood included with the lens. Never thought I would be see a manufacturer make a sub 3 lb. 800 mm lens.
Reactions: 2 users

I did not realize it was a fixed aperture. I have the 100-400mm L, so with TC's, I'm not sure I'd benefit from the new lenses. The weight would surely be a factor.
Reactions: 1 user

Yes, MILC makes it possible to design lenses that didn't make sense before, e.g. with much narrower max aperture, which makes for lighter super teles. I get why people are baffled by those lenses.

I'm impressed with the fawn image you've posted. The bokeh is much better than I expected.

I wonder why is it only the center third of the viewfinder is active for autofocus.
Reactions: 1 user

Thanks for posting, love the light in that photo
Reactions: 1 user

Act444 said:
Interesting, thanks for sharing. I was thinking whether the 800 f11 made any sense to pick up - I could use the reach at times - but my RP's high ISO performance really isn't up to the task TBH. Maybe later (or see what other options appear).
Click to expand...

my RP wouldn’t take the lens. I believe it needs a firmware upgrade. Only reason wife didn’t snarf this up already.

tiggy@mac.com said:
my RP wouldn’t take the lens. I believe it needs a firmware upgrade. Only reason wife didn’t snarf this up already.
Click to expand...

There is a firmware upgrade to the R and TP for the new lenses. That will likely fix any issues.

Mt Spokane Photography said:
There is a firmware upgrade to the R and TP for the new lenses. That will likely fix any issues.
Click to expand...

worked great. Upgraded this a.m. must hide from wife.
Show hidden low quality content
You must log in or register to reply here.