Northlight Images has found a US patent showcasing a new way to design tilt-shift lenses.
Says Northlight Images:
When you tilt a lens there is often some unwanted shift introduced, by dint of the lens design and where the physical axis of tilt runs with respect to it.
It’s why I modified my original TS-E90mm) – the new version, as with the 17/24mm, has the ability to change the shift/tilt axis relationship. However, Canon has looked at correcting.
In the patent, the unwanted shift from tilt is referred to as composition shift (a useful term – I may be using it in future ;-)  )
The tilt function of the new lens designs is given by offsetting a lens element in front of the stop – the shift is offset by an opposite movement on the rear (camera) side of the stop.
We have had RF mount tilt-shift lenses on...
Click to expand...

It is totally unsurprising that Keith would find this.
Reactions: 7 users
J

For those that like searching for Canon's hundreds of patents

I'm probably never going to buy a tilt/shift lens (at least not the expensive pro kind from Canon), but with all those patents I'm getting very curious about what Canon have up their sleeve for next tilt/shift lens releases.
Last edited: May 21, 2022
Reactions: 1 users
D

It doesn't look so:
"The patent includes example designs for quite a few longer lenses (number rounded to nearest ‘standard’)

Bob Howland said:
It is totally unsurprising that Keith would find this.
Click to expand...

Thanks - In the original post there is also a Japanese Canon patent for a zoom tilt ;-) 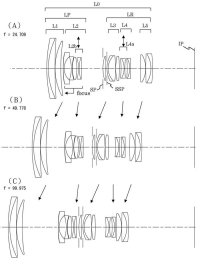 Nemorino said:
It doesn't look so:
"The patent includes example designs for quite a few longer lenses (number rounded to nearest ‘standard’)

I was so excited, I didn't read cautiously!

Del Paso said:
I was so excited, I didn't read cautiously!
Click to expand...

These patents often only cover specific design aspects.
How they are fitted together in an actual product often won't appear until after the lens is launched.

Tilt without any [normal] shift would be a mighty specialised lens.

If you want to put all the current bits I've seen in patents together, we could get an RF 24-100 f/4 zoom AF tilt/shift lens with powered movements - operated with lens rings (as opposed to the current knobs) and providing full EXIF data. A 20-50 would perhaps appeal more to me

keithcooper said:
Tilt without any [normal] shift would be a mighty specialised lens.
Click to expand...

I expect a fast tilt only prime for event and sport photography a135mm 2.8 e.g.

A zoom would probably to large, to heavy, to expensive and to fragile to get in the market.

Another question: which body could handle a electronic tilt lens?
Show hidden low quality content
You must log in or register to reply here.