Architect1776 said:
My interest in it is to use top quality older lenses that do not have it including old L FD lenses.
Click to expand...

What would be for you the top quality fd lenses? I have no clue since I have been born after the fd era.

YuengLinger said:
Things are in flux.

The great dSLR sell-off stampede swells. Hold onto your hats.

Hoping against hope CF cards will be in the mix. Sigh...I have so many, two still unopened!
Click to expand...

Probably a sports/birb camera with high FPS, 24 mp, dual cfexpress, lower res EVF but fast. $3-4K? Not quite as good as the 1DX, but a proof of concept showing what they can do with mirrorless. Would make sense with the Olympics coming.
M

hmatthes said:
Pressing in on the focus nubbin brings up 6x or 10x zoom with my Leica SL. Genius! I shoot manual focus fairly often and this is essential...
Click to expand...

In the Panasonic range, if you have it on MF, then as soon as you twitch the focus ring, a magnified inset appears in the EVF showing an area covering the focus point. I find that more useful than zebras, and it is programmable (magnification and whether the inset appears at all). No need to touch a different button.
Reactions: ahsanford

Well, now I really don't know what to think. I literally just posted on the forum about whether I should upgrade now from my Canon 80D to the EOS R or wait for new iterations.

I'm sure we will find out more information soon enough.

ahsanford said:
+1. I lived in LA for years, and it was by and large quite safe. But hanging out at night in the dark corner of a hillside or empty park to capture freeway light trails or some cityscape I would not dare attempt without a friend with me.

So I often made do without the tripod. I'm not saying IS is a tripod in a pinch, but there is no denying it can help.

Growing up in the Los Angeles Metroplex I can roundly say that Compton, Hawaiian Gardens, Skid Row, East LA et all, (which I frequented often), and west 7th street in San Bernardino were not safe to hang around at all with anything of value on display. Hard to run away and conceal with a tripod in hand. Las Vegas isn't much better.

That said, Detroit is a whole other world and I have visited there too.
N

Mikehit said:
In the Panasonic range, if you have it on MF, then as soon as you twitch the focus ring, a magnified inset appears in the EVF showing an area covering the focus point. I find that more useful than zebras, and it is programmable (magnification and whether the inset appears at all). No need to touch a different button.
Click to expand...

The EOS-R has that as well.
K

I'm actually hoping one of the new bodies is a genuine replacement for the 7D mk II. Come on Canon, lets see a pro sports body with the MILC magic! Gimme that 7D replacement so many people have been begging for and watch it sell out fast!
Click to expand...

There is nothing wrong with Canon giving me a camera that is both a high MP body (in FF) and a 7D mk II replacement (in APS-C crop mode). I will be willing to pay for it.

ahsanford said:
If Canon wants to build a good-better-best platform like Sony and Nikon, in which there is a clear single top dog model with best res / speed / features, withholding IBIS to only that price point would be the total villain move.

I'm not sure Canon will be that foolish. Potential super-spec 60 x 10 camera possibility = low, but possible. But IBIS only on the $3500 camera while it's everywhere at Sony and Nikon? I just don't see that happening.

Good-better-best is probably right. The current issue in RF:

1. "Good" (RP) is too close in performance/price to "Better" (R), and the former has a feature the latter lacks - focus-stacking. The R2/5D MKIV entry is needed to fix this.
2. "Best" does not exist on RF. There is nothing better body-wise than an R, which is slightly lesser than a 5D MK IV. There is no 5DS killer, even more crucial than on EF with a host of mega-premium glass exclusive to the RF mount.

So I think for #1, the 5D MKIV replacement IS the "R2". Where the R was the same or slightly worse than the 5D MKIV in most respects, the R2 will be somewhat better, particularly in IBIS, video format, card slot format/buffer, slightly faster, and marketing-level gains in MP using new sensor and DIGIC tech (probably 1x DIGIC X). There's no need to have an "R2" AND a "5D MK IV replacement", there is not enough segmentation there.

Then you'll probably see the RF 1DX around August/September 2021, 5-6 months prior to the 2022 Winter Olympics and 18 months after the EF MK III, maybe followed by an RP2 right before the Winter Olympics (with that and the World Cup coming that year).
Reactions: DarkPhalanx, Trock and ahsanford
M

Danglin52 said:
At some point, stabilization doesn't matter if you are trying to stop the motion of your subject. It does't do any good good to shoot 1/30 sec if you subject requires 1/640 - 1/1000 th to stop motion. In addition, on subjects impacted by wind you will still enough shutter speed to freeze motion.
Click to expand...

Its having options at our disposal that we never had before. I guess whats nice about lens IS is that it can be turned off

ahsanford said:
There eventually will come a tipping point that what mirrorless has to offer is worth at least a partial migration in the form of a second body.

For 1-series users, I'm assuming it's all about that glass -- there will eventually be enough great/unique/modern RF lenses that folks leaning on their 1DX3 shutters take notice and get in on RF (EVF, battery life, warts and all).

The question for 1DX3 users is: are RF superwhites a must for leaving 1DX-land? Or will just better versions of the f/2.8 zoom trinity or a staple standard prime be enough for you?

I don't own a 1dx3 yet, but I own a 1dx and have the mark 3 on order. I don't care about RF super tele lenses as it seems from all reports my 500 will adapt well as well as other lenses. I am not a technical guy, but from what I have read there is no advantage to an RF 500 or 600 lens over the EF other than it being a native mount. I don't know for sure.

For me to completely ditch a DSLR I will need an EVF which doesn't kill my eyes, and battery life. I fully plan to complement my 1d camera with a either the high MP R coming out, most likely, or sell my 5d4 for the R2. That being said I am not sure why we cannot have both? It seems some people are angered by the mere existence of DSLR's nowadays. I just don't see an evf ever being a replacement for an optical viewfinder for long bouts of wildlife photography.
Reactions: Michael Clark and ahsanford

DarkPhalanx said:
I have no idea which part of the specs you assume (32mp/12fps/IBIS) is incorrect (in whole or in part). It may be that the new camera will receive (2) CF express card slots and not just one. It could mean that it indeed would have video RAW, as opposed to the original release that said it wouldn't. It's all speculative.

Speculating that it's be a 40mp sensor and 10 fps doesn't add up for me personally. Not if the EOS RS verson is to be around 60-75mp. The 32 would still give it a little bit better low light success as compared to the 40, IMHO.
Click to expand...

The new rumor (this post) stated the prior rumor the 30mp 12fps was wrong because Canon is stepping it up a gear. I don't know where the specs will land, but I read that to mean the specs will be better than what was reported (30mp 12fps). Maybe is is 32mp and 20fps or maybe it is 40mp and 10fps. If it were only the change of a card slot I doubt that would warrant a source correcting the entire post. I don't know merely giving an opinion.

I have no idea what adds up to you personally and how that relates to this thread. We may just have a language disconnect. Not trying to be rude.

I would love to see a Canon body put Sony in the dust. : )

Kit. said:
Then the resolution, DR, refresh rate, and power consumption of the EVF matter, as well as eye strain after its prolonged use.
Click to expand...

I don’t understand what you’re getting at.

The 1DX3’s performance in live view looks awesome. A mirrorless camera is pretty similar to a DSLR in live view mode.

An EOS R camera with the same specs as the 1DX3 in live view mode would be really good.

While everyone is aiming high, it might just be lower than the RP. Possibly one entry FF with RF mount, recycled sensor and a few less tidbits than the RP and the other, a 5D styled all rounder. 30-40 MP, two mismatched cards, pretty good weather sealing, nice grip, moderate fps, an improved EVF over the R, expanded AF points, maybe taking a cue from the 1DX3 yet not a full magic AF trackball. I think it's a bit early for trickle down hardware.

I would love to see more options for everyone!
Reactions: Canon1966
N

Jasonmc89 said:
I don’t understand what you’re getting at.

The 1DX3’s performance in live view looks awesome. A mirrorless camera is pretty similar to a DSLR in live view mode.

An EOS R camera with the same specs as the 1DX3 in live view mode would be really good.
Click to expand...

You weren't paying attention. He's talking about the EVF, not the live view on the back screen.
Using the EVF for a long period of time will strain your eyes, unlike the OVF.

That camera kind of already exists: 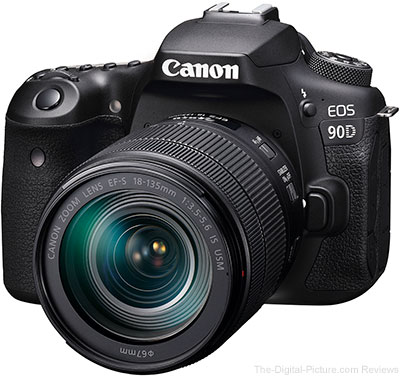 It just lacks an integral EVF and the ability to use RF lenses, but if you want to bang away on a 32 MP x 14 fps rig, it's already here.

- A
Reactions: Joules and Jethro
N

CanonFanBoy said:
Growing up in the Los Angeles Metroplex I can roundly say that Compton, Hawaiian Gardens, Skid Row, East LA et all, (which I frequented often), and west 7th street in San Bernardino were not safe to hang around at all with anything of value on display. Hard to run away and conceal with a tripod in hand. Las Vegas isn't much better.

That said, Detroit is a whole other world and I have visited there too.
Click to expand...

I lived in East LA for about 4 years and although my neighborhood was far safer than rumor had it, I still wouldn't want to be hanging around alone with equipment that looked valuable.
Reactions: CanonFanBoy and ahsanford
Show hidden low quality content
You must log in or register to reply here.

There is an APS-C RF mount camera coming [CR3]