An interview with Canon executives was done in Japan by MyNavi and covered a wide range of topics in regards to the brand new Canon EOS R system.

Here are a few points from the interview (Google translated)

During the launch event, it was reported that the Canon EOS R sensor was the same as the EOS 5D Mark IV’s sensor, but apparently, that’s not the case.

Mr. Kiyota : The number of pixels itself is the same as EOS 5D Mark IV, but the sensor itself is newly developed. The content has changed a lot, such as adoption of a new dual pixel CMOS AF and arrangement of microlenses according to EOS R system. (Google Translated)

EOS R, is it positively an EOS 5D class camera?

Digital lens optimizer now happens in real time, as the information comes directly from the lens.

Mr. Kiyota : I think that comprehensive image quality basically exceeds EOS R. The biggest difference is the digital lens optimizer that can process information coming from the lens in real time. Until now, postprocessing with DPP (Digital Photo Professional) was necessary, but in addition to being able to process chromatic aberration and distortion etc in real time without decreasing the continuous shooting speed (Google Translated)

Canon didn’t put IBIS in the body this round due to concerns about size, heat and cost, but may look to add it to future Canon EOS R bodies.

Mr. Kiyota : When installing the image stabilization mechanism inside the body, you must overcome the challenges such as size, cost, heat generation. Regarding EOS R, after considering various things, it became such specification. Of course, it does not mean not to put the camera shake compensation mechanism inside the body. We will select and judge the nature of the camera. (Google Translated)

Mr. Kiyota : First of all, I will introduce EOS R as a well-balanced middle class, but of course I am thinking about the higher and lower models than that. In particular, since other companies are issuing higher pixel models, we believe that there will be many requests from those competing models. (Google Translated)

There are a few and likely much smaller f/2.8L zoom lenses coming in the near future. 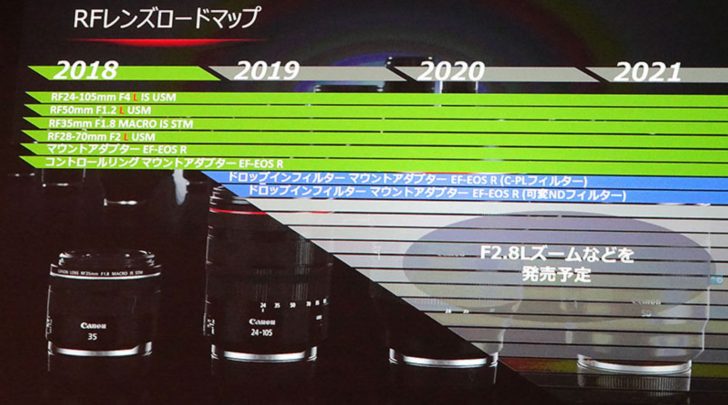 A cinema EOS R body is possible in the future and could shoot 8K, but there are a lot of technical issues to still be sorted out going to 8K.

Mr. Kiyota : We are assuming 8 K as an EOS R system. However, regardless of specialty fields such as broadcasting stations, there is a doubt that ordinary users need 8K in the first place. Even if you can shoot, there are issues such as whether there is a device that displays 8K, what to do with heat treatment, how to handle handling deterioration due to enlargement of file size, so carefully consider including those points first I think that it is necessary to go. (Google Translated)

Here are the Canon USA instant rebates for November

The Canon EOS R system turns 3 and Lensrentals.com gives us a breakdown of its progression