This is likely Canon’s lens roadmap for 2020

stevelee said:
I wouldn’t bother to carry around the 100-400mm to get the 135mm focal length. I’d just shoot at 105mm with my kit lens and crop a bit. I rarely need the whole 26MP of the 6D2. I realize that I would’t get the look of a wide open 135mm f/2 whatever I would do, but that is not something I have ever missed.
Click to expand...

I don't use primes enough to justify truly expensive ones, but even the (relative) cheapies have a better f/number than the zooms. I do have the 85mm 1/4; 135mm would be a logical step up...again if there were a non-L, an L isn't worth it to me. (My 100mm macro is f/2.8 and I tend to use it for...macro. The relatively minor focal length difference between it and an 85 is outweighed by the 85's aperture.)
Reactions: 1 user
•••
Upvote 0

SteveC said:
I'd probably get one...if there were a non-L version around.
Click to expand...

The EF 135mm f/2 L is generally available for well under $1,000 if you're willing to buy refurbished (when the Canon refurb store has them) or used from reputable sellers. My favorite used seller is currently Lensrentals.com's used department, lensauthority.com. They've currently got at least three listed for sale.

I got my 135/2 direct from Canon refurb for a little over $700 plus tax, but it took a long time of watching for when they had one listed in stock. I had a notification set up (I think via CPW) and missed a couple of opportunities because I didn't see the e-mail for 4-6 hours after they were listed and they were already sold out.
•••
Upvote 0

SwissFrank said:
Disagree. People were as concerned with resolution then as now, and I haven't seen a comparison where the EF 50/1.2 produced a more pleasing or otherwise aesthetically preferable image to the RF 50/1.2, except for the vignetting in the RF (which is fully corrected by software should you wish). The only plus I'd give the EF's was size, but I imagine the coming RF 1.8 will be small enough. I had all the EF 50s (1.8 1.0 1.4 1.2) and was so glad to sell them once I realized how good my RF was.
Click to expand...

People were not as concerned about resolution back then to the degree they are now for a variety of reasons, mostly to do with the limitations of roll film. It doesn't lay perfectly flat against the back plate. The three color emulsions are at slightly different distances from the lens. Grain in the emulsion was not perfectly distributed.

Lenses do not need to be near as sharp to exploit the limits of film or early digital sensors with well less than 10 MP of resolution as they need to be to exploit the limits of 50MP+ sensors. Why do you think Canon released so many upgrades to the "L" series lineup in the couple of years before the release of the EOS 5Ds / 5Ds R? It was because most of their lenses, including some of the top tier primes and f/2.8 zooms were not up to the challenge of a 50MP sensor if one is going to go pixel peeping with the results.
Reactions: 1 users
•••
Upvote 0

I think people that worry about lens sharpness and resolution are in an enchanted forest and are looking at a twig on the ground.

I have seen utterly stunning images from the EF 50 f1.2, simply stunning; in contrast most of the images I see from the RF 50 f1.2 look overly ‘digital’ and clinical, like images shot with a macro lens.

The vast majority of images I find compelling do not rely on micro-contrast in the corners they are compelling because of the subject matter, the timing, the light etc etc etc.
Reactions: 2 users
•••
Upvote 0

SwissFrank said:
I have no idea what you're talking about.

I have no idea what you're talking about, either.

What I actually said (which you couldn't even include to the first comma because it weakens your depiction of what you want to pretend I meant) is, " People were not as concerned about resolution back then to the degree they are now for a variety of reasons..."

So please stop pretending I said no one cared about resolution at all without any qualifications. 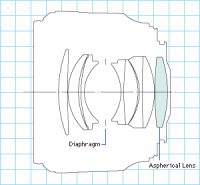 As Roger Cicala noted in the blog entry linked above, "It’s also not surprising that each of the 50mm lenses have some characteristics in common (wickedly sharp in the center, a bit of field curvature, a bit of edge astigmatism, etc.)." If you want to argue that the EF 50mm f/1.2 L is not sharp in the center, argue with Uncle Roger.

In January of 2007 when the EF 50mm f/1.2 L was introduced, the current cameras in Canon's EOS lineup included:

Not a single new or updated EF lens. When I get to the point where I want an updated version of one of my EF-L lenses, and the only way to get it is to buy an RF mount version. That means I also have to buying a RF mount body. Before I do that, I will look long and hard at other camera makers systems.
•••
Upvote 0

Funit said:
Not a single new or updated EF lens. When I get to the point where I want an updated version of one of my EF-L lenses, and the only way to get it is to buy an RF mount version. That means I also have to buying a RF mount body. Before I do that, I will look long and hard at other camera makers systems.
Click to expand...

I’d like to see the images you are making when you feel Canon don’t make an EF lens good enough.
Reactions: 2 users
•••
Upvote 0

SwissFrank said:
Thanks for the lecture, Mikey, though we all know this. Your initial, and quite mistaken, claim wasn't about lens designs but lenses themselves. I'm kind of insulted that you think the readership of this forum would forget your initial thesis and applaud your scrambling attempt to support it, but no, we can scroll up and see what you were initially talking about. When you're caught out wrong, just admit it and learn something. Don't double down on stupid.
Click to expand...

What I originally said was:

"The EF 50mm f/1.2 was not primarily designed to be the sharpest lens around. It was designed to do other things, because back then most folks cared more about how the actual photos they took looked than how sharp they could take a photo of a flat test chart. Some of us still do, but the flat test chart lenses are what sell now, even if the out of focus areas don't look near as good as some of the older lenses do."


Nothing I've said since backs away from that in any way. It was not designed to be a Macro lens. Canon already had plenty of Macro lenses when the EF 85mm f/1.2 L ( and later EF 85mm f/1.2L II) was introduced. Flat field performance was not the overriding design feature that lens was created to meet. Disagree all you want, but that doesn't change the facts. If Canon had wanted to create an 85mm lens with superior flat field performance they'd already previously demonstrated rather well that they could have done so. They didn't, ergo that was not what they created the 85/1.2 to do.
•••
Upvote 0

On the other hand, you seem to forget that you said no one could make a lens like the RF 50/1.2 a decade ago and then criticize a lens designed more than a decade ago for not meeting a standard you just claimed couldn't be matched at that time.
•••
Upvote 0
Show hidden low quality content
You must log in or register to reply here.

Hot Deal: Save 10% off refurbished gear at the Canon USA store