I felt like being a strictly video first camera guy he, in other videos more than this one, has been biased towards video features. While I would admit the R5 and the R6 are not workhorse cinema cameras, I feel like both are better than the Sony a7s III. The sony asks users to sacrifice too much photography features for video features that are not that much better in terms of quality and quality alone than both the R5 and the R6's video features. There are a lot of other things that make the sony a great video camera but the quality alone isn't that much better than the R5 and R6. In fact, both of the Canon’s oversampled 4k modes exceed the Sonys 4k mode in quality, but the canons have a huge problem with overheating, which of course has been said over and over again. And its more than fair, the over heating itself isn’t just an issue, it's the ridiculous cool downtime. But comparing standard 4k modes of both cameras, the Sony does better because it doesn’t have to throw away as much information as the canons because it’s the sensor is lower resolution. Which of course makes it an amazing low light camera and gives it excellent video quality, but makes it tough to recommend. While the low light beats the canon by a country mile, I feel like the standard 4k doesn’t beat it by that much. But the canon is head and shoulders above it on the photography side. It shoots faster, has more resolution, and autofocus is better. Even the eye autofocus is as good if not better than Sony’s. At the price point of $3500, it's hard to recommend Sony to anyone that has an interest in shooting both stills and video, especially if you want to post pictures anywhere else than IG. But again, it's a great video camera with great video quality, and other amazing bells and whistles that reinforce it as a video-first camera, but if it were priced at 2800 to 3000 it would be tougher to put this over the R5, but I still think in some ways both canons are better.
Reactions: -pekr-, cornieleous, Nelu and 3 others
B

Bert63 said:
He should have opened the review with the statement that ”the following video will be of no interest to anyone who buys this camera for its primary purpose...”

The only reason I watched him at all was because of the headline ”best camera review ever....”

You've spent more than 10X that amount here on CR complaining about people complaining about the ONLY Stills cameras in the WORLD that does 8K VIDEE-OHHHHH. LOL!
Reactions: Twinix, Starting out EOS R and unfocused

If you're thinking wildlife shooting this camera is more than impressive and the reviews are showing it. This guy's delivery is kind of boring but the substance is there and it is well worth viewing so I'm repeating the link. The haters are going to be sulking soon. Eye AF better than the A9II which was/is his go to camera.

marathonman said:
I guess you missed the last 10 years where Canon have been chastised for playing it safe, not innovating enough and protecting other products in their line-up. The cardinal sin has also been committed by not giving the YouTube Vloggers what they demanded!
Click to expand...

Yes, I missed that too.

Please point me to where any V-Logger in the last 10 years has said: "Canon, just give us feature X. I don't care if it overheats in Z minutes"
Reactions: unfocused

The Baron is a youngster give him a break ... or just ignore.

Jack
Reactions: Starting out EOS R and Bert63
B

Nelu said:
Same here, the first half was all about video, so I couldn't care less about it.
Click to expand...

Well then you and others completely missed out the point of his video and skipped over the main words in the video title: "TERRIBLE Marketing"

From EF to RF

All I know is that people will eventually find that one thing to complain about. We are a world of complainers — I’m even complaining about those who complain.
Reactions: Gazwas, SteveC, Jack Douglas and 1 other person
B

Jack Douglas said:
The Baron is a youngster give him a break ... or just ignore.

I'm not a video guy so it doesn't really matter much to me, but I would be interested in hearing theories about this: 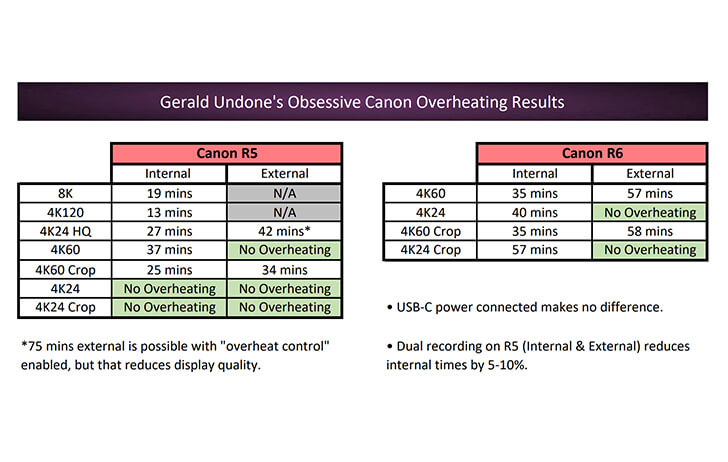 Why does the R6 have overheating time limits on the modes that the R5 does not? (Specifically looking at 4K24).. With the significantly smaller number of megapixels and same processor I would expect the run time to be longer.

The only theories I can come up with (and these are kind of supported by what others have seen):

1) The magnesium body on the R5 is an integral part of the cooling process.
2) The reformatting of raw sensor data is more computationally extensive from a 20MP sensor than a 45MP one. Maybe the aspect ratios are not good for video on the R6.

Bert63 said:
The first half? HALF?

He mentioned photography in passing at the 20 minute mark of a 23 minute diatribe about video.

Yuk. It’s hard for me to watch this guy to begin with, but I thought he was actually going to review the camera.
Click to expand...

why don't you just ignore him? LOL

Jack Douglas said:
If you're thinking wildlife shooting this camera is more than impressive and the reviews are showing it. This guy's delivery is kind of boring but the substance is there and it is well worth viewing so I'm repeating the link. The haters are going to be sulking soon. Eye AF better than the A9II which was/is his go to camera.

I know, I just posted that a few replies back

What is it about Canadians and saying eeee-ahhhhhsss?

Pixel said:
What is it about Canadians and saying eeee-ahhhhhsss?
Click to expand...

Nelu said:
I know, I just posted that a few replies back

I wasn't trying to one-up you, just promoting it.
Reactions: Nelu

Pixel said:
What is it about Canadians and saying eeee-ahhhhhsss?
Click to expand...

marathonman said:
I guess you missed the last 10 years where Canon have been chastised for playing it safe, not innovating enough and protecting other products in their line-up. The cardinal sin has also been committed by not giving the YouTube Vloggers what they demanded!
Click to expand...

And yet, this "playing it safe" led them to dominate the market.
Reactions: Michael Clark and Jack Douglas
J

BeenThere said:
Everybody who plans to buy an R5 or R6 should watch this video. Then, don’t complain when the camera does what Gerald Undone clearly tells you it is going to do.
Click to expand...

What? Take great photos. I’ve honestly never even looked at the video menus on my cameras let alone shot even one second of video. Not everyone cares about video. Keep your peanut butter out of my chocolate! Does every camera body have to be a Reese’s peanut butter cup?
Reactions: Michael Clark, cornieleous, Bert63 and 1 other person

Useful testing, but it doesn't correlate that well with DPRs testing, particularly with respect to cool down times. The review is 95% about video (the very thing he says you shouldn't buy the camera for and then his conclusions are stupidly binary. E.g. "If you need 8k, don't buy this camera". That is a stupid remark in that it doesn't qualify how you might use it for 8k and ignores the fact that it is only way to get to 8k short of spending $100k on a Red. It seems like most utubers are more interested in being influencers that informers. So far, Gordon Laing's review at Camera Labs is way the best.
Reactions: Michael Clark and cornieleous
Show hidden low quality content
You must log in or register to reply here.

The Canon EOS R6 sensor scores a 90 from DxO