There has obviously been more talk about how quickly the Canon EOS R6 and Canon EOS R5 overheat when recording video, especially when shooting 8K or 4K60p (along with other framerates). The second issue a lot of videographers have is how long the cameras need to cool down once they reach an overheating threshold.

So is Canon going to do anything about it?

I think so, and I’ve been talking to a few sources and reading between the lines a bit. Canon released its first statement about the heat concerns back on July 16 and has been relatively silent since.

I have been told that Canon is actively working on solutions to increase record times and reduce cooldown times. What those solutions are is unknown at this point. I imagine part of it is firmware, but are they also looking at a hardware fix?

I have no been told a couple of times that the 2nd allocation of camera bodies will be delayed. Adorama told me it was going to be a significant delay, but that they didn’t know why or how long the delay would be.

A reader I was chatting with on the Canon Rumors discord server was having an unrelated issue with the EOS R5 and was sent this by the Canon Store support.

“The R5 was sold out within hours after launch. The next shipment is expected this November“ 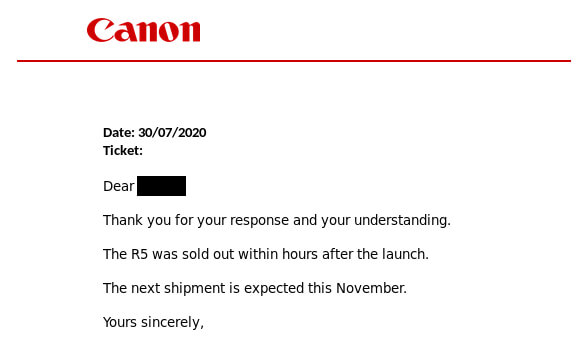 I’m waiting for further follow-up on the statement above and I’ll update this post once I have it.

A four-month delay between the first and second allocation of a new camera body would be unheard of. There could obviously be a parts factor due to COVID-19, but I would like to think that would have been planned for better and that they could have delayed the shipping of the first batch of cameras until September or so.

An anonymous communication yesterday let me know that “Canon is working on multiple solutions and will have a full statement and plan in the coming weeks.”

New firmware is definitely coming, but will there be a hardware solution/recall too? It’s starting to feel that way. But let’s wait and see what Canon has to say about the issue and get further confirmation about the second allocation being delayed until November.

Please remember that this is third party information, so treat it accordingly.

How can you stand out, if you do like evrybdy else

I am not sure if I want it now and ship back when a solution requires for it, or to wait another 4 months. Dilemma.
M

Or they can go the sony way by changing this line in the firmware:

Jokes aside this is the way sony addressed overheating complaints in the past:

"One of the major improvement has been seen on the A6300. With the new firmware it takes more than double the time before it overheats in comparison to the older firmware."

"Sony has now fixed the problem with firmware version 1.01 for the Sony Alpha A9. In the change log it simply says 'This utility updates the camera firmware to version 1.01 and improves the overheating warning functionality."
Last edited: Jul 30, 2020
Reactions: 10 users
J

The firmware fix: Disable the video features. Give those forum posters what they always say they want
Reactions: 14 users
B

Not a big deal for me as I am primarily a stills photographer. I will enjoy it for 4 months and deal with a recall if/when it happens.
Reactions: 20 users
B

Besisika said:
I am not sure if I want it now and ship back when a solution requires for it, or to wait another 4 months. Dilemma.
Click to expand...

Not much choice if you did not get in the first delivery.
Reactions: 2 users

At least this time I’m not sitting with the camera in hand when it’s recalled, I’m looking at you 1d mkIII
Reactions: 3 users
G

There was a test in youtube that shows A7s3 overheating faster than R5! Now this is only fun to shut up Sony boys. I am getting my R5 tomorrow so I will be able to test it and to see if overheating is a big issue. However if Gerald Undone is correct, my problems are solved with the Atomos. At least for 4k60..for 4k120 no but I guess I wont make 17 minutes of slow motion in 1 day....Canon could somehow decrease a bit the bitrate without losing quality and try to increase record times...Or finding some firmware update to improve it. If they could manage to change record times to 1 hour 4kHQ and 30+ minutes 4k120 that would help a lot!

Another thing they could do is to find a way to release the possibility of recording 4k20fps externally.

Other options the adapter to attach between camera and lens would be well received if it can manage to cool down a lot faster the camera. But....in that solution Canon should offer the adapter or price it in a really low price because we would need 2 adapters..rf to rf and rf to ef.

I hope they can improve in a firmware update, I am expecting this camera for 3 years and now that I am going to have it, I dont want to let it go not even for 1 week!!
Reactions: 4 users
L

...something doesn't seem right about this entire scenario--surely Canon knew about the heat issues prior to the product's release, right?
Reactions: 5 users

Honestly, if a hardware fix means a better solution for all I hope Canon does this to keep its brand image intact, as by not doing this there may be a serious backlash! But before anybody crows about Sony, did Sony ever do anything when the issue was widely flagged on their older models????
T

the conversations going on in Canon engineering must be interesting.
Reactions: 13 users
U

I was too late in the preorder queue and was also told today to expect the shipment in late October (in Australia). It's three months not four, but still a surprisingly long delay.


As for what's next, not sure, what else can they add?
Reactions: 9 users
U

Looks like there won't be any holiday season discounts on the R5. Maybe next year.
Reactions: 1 user

Oof. I wonder how fast the R6 sold out, and what that delay looks like.
Reactions: 1 user
Q

TominNJ said:
the conversations going on in Canon engineering must be interesting.
Click to expand...

They must be very heated conversations.
Reactions: 31 users
L

I do feel this topic is kind of prodding my anxiety, I've been tweeting my dealer and said, for Gods sake, just let me know if I've made the cut......
Reactions: 1 user
Show hidden low quality content
You must log in or register to reply here.

Canon thinks that the camera market decline has bottomed out, and targeted growth is coming