Netflix has rejected the Canon EOS R5C for production certification, and we’re told that Canon doesn’t have any intention to address the issue like Sony did with the FX3.

Neither Netflix or Canon has spoken directly on why the camera was denied, but the only thing we and others can think of is that the camera lacks Canon Log-2. There may be some other image quality reason that we don’t know about. The Canon EOS R5C seems to have every other feature required by Netflix for certification.

The Canon EOS R5 C can still be used for productions, but footage from the camera cannot make up more than 10% of the total runtime of the production.

We’d love to hear more on this topic.

What's the source? Or is this a rumor?

aeronium said:
What's the source? Or is this a rumor?
Click to expand...

A couple of DPs have let us know in the last week or so.
Reactions: 1 users
W

Considering that Netflix usually takes 30-45 days to evaluate each camera depending on demand, I'd say Canon knew about the camera not being certified for at least the past two months. Back in April, during NAB, a lot of people asked about the certification and they've said it was under "under going evaluation".

Also, considering that both the VENICE 2 and the Alexa 35 were launched after the R5C and they are already certified, I'm pretty sure Canon just decided to not notify anyone about this - especially because being certified for Netflix original content is a big deal nowadays. They also didn't spoke up about the C200 either.
Reactions: 1 user
S

I'm curious why would a certain camera even need to be certified to film a Netflix show?

SnowMiku said:
I'm curious why would a certain camera even need to be certified to film a Netflix show?
Click to expand...

It's probably about consistency and future proofing
Reactions: 2 users
W

SnowMiku said:
I'm curious why would a certain camera even need to be certified to film a Netflix show?
Click to expand...

It's just a matter of quality control. Big broadcasters have been doing this for years now, in order to maximize their workflows and minimize quality gaps between productions.

As far as I know, they consider image quality (the technical standard, evaluating the signal to noise ratio, dynamic range, black levels, and the list goes on), codec (options, bitrate, color subsampling, bit depth) and also inout and output terminals. Cameras such as the C200 and Pocket 4K Cinema Camera were rejected due to the lack of timecode inputs, per example. And since the R5C does have a timecode inout and plenty of codecs, even a RAW format, my guess it that it was something regarding the image quality of the camera - and they could be spot on on the lack of Canon Log 2, since it's the required gamma for most of the certified Canon cameras on the Netflix PTA website.
Reactions: 7 users

I actually appreciate the strict standards Netflix & other streamers demand.

Log 2 seems an odd omission, and even odder if Canon says it doesn't intend to address that issue.
Reactions: 3 users

Well - Maybe its the non full size and quite "adapter cable picky" (as far as I read) DIN 1.0/2.3 timecode port on the R5c. Or - And thats maybe even more the point - The MICRO HDMI port on a professional camera. Its just a shame that they did not include at least a Mini HDMI Port (which has to withstand the same physical stress as a full size HDMI port has to regarding the HDMI specs). Still asking myself why they did that. Its making no sense ...

Both points are not "software fixable". So no chance for Canon to solve that.
Reactions: 1 user
P

The Netflix camera certification has become a major industry standard and a guide by which many Hollywood producers operate. Even if you have no intention to shoot something for Netflix, if you work in the entertainment business in LA, having a Netflix-approved system increases the value and usability of your camera. How Canon managed to flunk the 4K Netflix standard with a brand new, 8K sensor that shoots raw, is beyond me. I'm guessing it's because of their stubborn refusal to put Clog2 in the R5C, which effectively reduces the camera's dynamic range, making it less acceptable for HDR content. That's the only thing I can think of. The prevention of Clog 2 in the R5C is the Canon cripple hammer in full force. I own both a C300 III and an R5C, and having to explain to post facilities that they need to use two different LUTs with the footage I'm handing them is really annoying. I wish they'd just give us CLog 2 on the R5C and stop being so stingy. But alas, it's Canon. And this sort of decision is on brand for them. I really hope the Netflix decision gives them a bit of a wake-up call, but I doubt it.
Last edited by a moderator: Sep 13, 2022
Reactions: 6 users

The weird thing about the C-Log2 theory is that the RAW video is interpreted as C-Log2 footage. There is a possibility that the camera does not have the dynamic range specified by Canon for C-Log2, but I don't know why that would matter as far as netflix is concerned unless it really is just a dynamic range specification that is required for certification. Honestly, I can't imagine anybody wanting to use a Canon R5c for more than 10% of a production, though. The C500II is a much easier camera to use if somebody was set on using Canon camera. And you could still use the R5c as a crash cam or drone cam and have it match nearly perfectly.
Reactions: 1 user
W

cpreston said:
Honestly, I can't imagine anybody wanting to use a Canon R5c for more than 10% of a production, though.
Click to expand...

Get something like Hyperdrive or Drive to Survive and you'll see how the amount of crash cams can get over 10% real soon. That's one of the main reasons the Komodo is getting more and more popular for Netflix productions.
E

... and why they submitted the R5C for Netflix certification in the full knowledge that the lack of Log 2 would probably cause their application to be rejected?
Reactions: 1 user
W

entoman said:
Has anyone asked Canon *why* they omitted Log 2?

... and why they submitted the R5C for Netflix certification in the full knowledge that the lack of Log 2 would probably cause their application to be rejected?
Click to expand...

The C200 is a perfect example: it lacked the Canon Log 2, but yet it was not certified due to the lack of TC I/ O.

The only odd thing about all of this is Canon's reaction for this, to not evaluate their options and just giving up entirely. Sony had their share of trouble with the FX3, but they solve all the complaints from Netflix and fixed in a firmware update, hence Netflix granting a certification.
Reactions: 2 users
S

It can’t be lack of CLOG 2 because the shooting specs for the C70 specify approved footage settings of CLOG 2 or CLOG 3. It wouldn’t have effected my decision to get an R5C either way but would be nice to think a firmware update could fix it.

Maybe it’s as simple as the R5C doesn’t have built in ND? 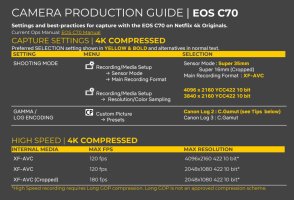 I think the whole Netflix certification thing is a load of baloney. Just do what the rest of the broadcast world does and publish minimum video specs for original productions. certifying specific cameras etc. doesn't do anything but make Netflix seem "extra". Besides, Netflix is in a heap of money trouble right now because they have real competition with other services, so why are they giving content producers reasons to pursue getting their content onto other services that don't put up such stupidity.

Just say original content to be distributed by Netflix must meet these minimum video specs, then list the specs. If content producers can produce video that conforms to those specs, great, if not, not great.
Reactions: 2 users
S

Scenes said:
It can’t be lack of CLOG 2 because the shooting specs for the C70 specify approved footage settings of CLOG 2 or CLOG 3. It wouldn’t have effected my decision to get an R5C either way but would be nice to think a firmware update could fix it.

Maybe it’s as simple as the R5C doesn’t have built in ND?

Yeah it's odd. I work with Netflix and Amazon and have delivered series to both. Amazon is much more flexible and pragmatic about these things. While Netflix has always had great resources and communication about camera specs and compression/steaming codecs, some of the decisions like this on the R5C are head scratchers.

I have a C70 for personal work and I love it, but I was considering the R5C as a replacement for my C70 and DSLR. Will be curious to see if there is an answer on this soon.
Reactions: 1 user
Show hidden low quality content
You must log in or register to reply here.