You are using an out of date browser. It may not display this or other websites correctly.
You should upgrade or use an alternative browser.
M

Hector1970 said:
I never understood the appeal of the M series. It's far more successful that I expected.
I'm not sure how small the L can be but it can be close to the size of an M.
I just find the thought of another set of lens, incompatible with R too much to be dealing with.
It make take years but it feels to me a system that will die out
Still in the short term it seems to be very successful for Canon.
It shows they can make nice small lens for mirrorless which I think would do well for the R when they are produced
Click to expand...

I see the M50+EF-M 32 as the "compact digital rangefinder" analogue to e.g. the minolta himatic series with the advantage of a 60x90mm image field at MFD. Hang that around your neck and you are an unsuspicious tourist with instant access to your camera. It plays very well with EF lenses for tele / macro / UWA at the moment.

While the EOS R/RP bodies are really expensive compared to the US (RP: 1700$, R: 2800$) I am not in the "grab-it-and-find-out" mood. But if a medium fast / high res / better video capabilitiy swiss knife EOS R enters the market I maybe are willing to use that for special jobs and the M50+EF-M 32 will stay for (1) walk around, (2) unsuspicious tourist cases and (3) standard focal length as 1st / 2nd body.
U

I wonder why for two reasons:

2. You'll get diagonal fisheye, but not circular fisheye. Why not hope for an EF-M 5-10mm?

Hector1970 said:
I never understood the appeal of the M series.
Click to expand...

uri.raz said:
I wonder why for two reasons:

2. You'll get diagonal fisheye, but not circular fisheye. Why not hope for an EF-M 5-10mm?
Click to expand...

FairlyKors said:
How. Does reality factor in to Canon’s plans? If we’re talking about worldwide sales Canon was proud to concede FF mirrorlesss to Sony and anyone else. It was an unexpected shift in plans that brought about their FF mirrorless cameras, neither of which are truly competitive nor selling well. The RF mount coupled with the RP is considered by most (including Canon) to be a massive push from APS-C to FF, taking a vast majority of internals from their EF-M cameras to piece together the RP. I don’t know how you definen arbitrary, but if I was a Canon APS-C shooter (DSLR or mirrorless) that move would feel rather arbitrary to me, especially Canon being the only company that isn’t rumored to be developing an APS-C model with their latest and greatest mirrorless mount and lenses.

I’m just curious how you arrived at your conclusions?
Click to expand...

We discovered the RF/EF protocol patent app last year, with a publish date of 2016.

A capable camera such as an EOS R most likely takes in order to 2-3 years to develop, even an RP takes a while to develop. Don't forgot not only do you have to design the electronics, you have to design, study, re-design, study more the ergonomic design especially of an entirely new camera, then you have to create the molds, design the assembly, do all the multi-lingual translations, manuals, certifications (which can take over a half a year right there), etc,etc,etc.

None of these decisions by Canon (nor Nikon) were done on a whim and a drop of a hat. That seems to be an ongoing internet myth being perpetuated.

Also we have no idea how well the EOS R,etc are selling. we have Japan marketshare numbers for a short period of time, however, the mirrorless full frame numbers in Japan in actual units are so small, there are statistically insignificant.
Reactions: 4 users
J

How do you like your RRS L bracket on your R? Especially regarding the flip screen?

bf said:
Good that M stays alive and there will be 2 new lenses! Bad if M6 is not updated. Range finder format makes much more sense to me. I guess just because people are used to look at the viewfinder.
Click to expand...

Bummer about the M6. I quite like that the viewfinder is optional, so depending on the situations the camera can be even more compact, or a tad more sunshine-friendly with the viewfinder attached. (Even though, perpetually: when you push and hold the "downward" or "info" button for over a second on the M6, as well as the higher range Powershots, the display will temporarily light up at the brightest setting. Works for some.)
Another reason why it's sad to see the M6 go is that IMHO design-wise the silver version was the only camera model where Canon offered a non-black version which didn't look just trashy (like the SL2 in white), and it also referenced the design of Canon's older rangefinder cameras. Unimportant perhaps but might cater to some buyer segments.
Reactions: 1 user

jeanluc said:
How do you like your RRS L bracket on your R? Especially regarding the flip screen?
Click to expand...

Construction is the usual RRS high standard. Seems Canon put a little hole in the bottom of the R, and RRS put a pin in it so there’s no twist whatsoever.

For my uses, I can live with the constraints and overall I like the bracket. I would have preferred the modular design where the upright is removable, though – love that on my 1D X bracket.
H

I assum it will be

I assume it will be an M50 without the viewfinder. if it keeps the vari-angle touchscreen and same 24MP sensor then it will be an instant hit for vloggers and video shooters looking for a B cam with DPAF.

koketso said:
I assum it will be

I assume it will be an M50 without the viewfinder. if it keeps the vari-angle touchscreen and same 24MP sensor then it will be an instant hit for vloggers and video shooters looking for a B cam with DPAF.
Click to expand...

In that case it will be the smallest, lightest and cheapest Canon camera with eye AF.
K

neuroanatomist said:
Let me sum it up for you in 1,000 words.
Click to expand...

Now add G7X there.
B 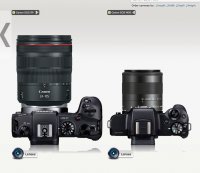 Relevant if you take pictures without a lens attached to your camera. How has that been working out for you?
Reactions: 1 user

Put an iPhone there, if sensor size and the ability to change lenses don’t matter to you. They matter to me.
Reactions: 1 user
H

neuroanatomist said:
Relevant if you take pictures without a lens attached to your camera. How has that been working out for you?
Click to expand...

But that's the point. Canon could produce small lens for the EOS-RP like they do for the M and probably will do so.
As a user I'd have one less mount to worry about.
The M50 seems to have a strong following and it appears to get very positive comments here.
I didn't really see the attraction of it but I guess for me an Olympus is covering the equivalent and if the M50 had been out before I got the Olympus I'd be a very happy M50 owner too.
Canon wasn't looking too far ahead at the time but its a pity the M mount wasn't the same as what they chose for the R series. But its too late now. I just wouldn't have personal confidence Canon will keep supporting the M mount and its lens system when they can probably produce an R of a very similar size and small lens.
In the end Canon will decide based on profitability. If people keep buying M50's or equivalents it will survive away.
Reactions: 1 user
K

neuroanatomist said:
Put an iPhone there, if sensor size and the ability to change lenses don’t matter to you. They matter to me.
Click to expand...

In addition, I think, you grossly underestimate the absolute aperture of a G7X lens.
Last edited: May 13, 2019
B

Del Paso said:
People like me who positively hate having to look at the little screen at the back of a camera, especially in sunshine.
I'll never understand how one can buy a camera without a viewfinder (like I bought that cute little Olympus Pen ).
Maybe I'm stupid (I certainly am), but I'm also unable to use live-view...in daylight.
Click to expand...

I have had the external EVF with M6; it came as a free gift from B&H but I have only used it a couple of times. I think the LCD in back of the camera is much larger and brighter than the little one in EVF. Then, there is also shooting remotely by your phone, which I used only a couple of times more than EVF. Also, shooting from hip that I do much more than EVF.
Reactions: 1 user

Hector1970 said:
But that's the point. Canon could produce small lens for the EOS-RP like they do for the M and probably will do so.
Click to expand...

Perhaps they could...but they haven’t. But let me get this straight, you are basing your lack of understanding of the M system’s appeal on the current lack of some hypothetical future lenses Canon may or may not produce? Truly, you have a dizzying intellect.

Even if Canon does come out with small lenses for the RF mount (slow, variable aperture zooms that have just decent optical quality), the system will still be substantially larger than the M line

More importantly, smaller RF lenses won’t detract from the other major reason for the appeal of the M system:

Next you’ll probably claim that Canon could make RF lenses and a FF MILC cheaper. Before doing so, you should consider the fact that the for the same price of the slow variable aperture, medium image quality EF 24-105/3.5-5.6 STM, I can buy an M6 + M15-45 kit.

But it’s ok if you don’t understand the appeal, enough people do to make it one of the most popular MILC lines in the world, and the most popular mirrorless line in Japan.
Show hidden low quality content
You must log in or register to reply here.

New reports about the next Cinema EOS camera have surfaced [CR1]